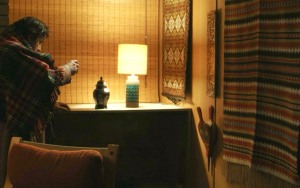 Are you watching Lillyhammer on Nerflix?  Stephen Van Zandt plays a mobster who chooses to go to “Lillyhammer” when the FBI offers him a place in the witness protection program.  “What’s not to like?” he says, mentioning the Olympics, snow, and pretty broads.  The scenes of New York pass by the camera, switching abruptly to a train tunnel and snowy Lillehammer.  He’s taken in a bus to his new home, which looks a little modest for “Giovanni Henriksen.”  The whole setting is intended to look foreign and exotic to an American viewer, but it looks remarkably usual to me, as it would to many of my weaving friends or to many Norwegian-Americans.  Doesn’t every home have a variation of these weavings on their walls?  I swear I’ve even had rosemaled bellows on my wall at some point in my life.