The annoying thing about life (and hence, weaving) is that everything has to be a learning experience.  Yet the reason to continue weaving is that each piece, or part of a piece, is humbling and challenging.  So it is with the my latest tapestry, which I have often wished I had NOT begun a couple of months ago.

Encouraged by all I had learned with the weaving of the wheat harvester tapestry, I decided to tackle a portrait of my father, posed in front of a potato truck laden with sacks of Red River Valley potatoes.  It was a 1949 International Harvester truck, for those who like such details. My mother guesses that it was taken in 1952, the year he had a bumper crop and the prices were good, allowing him to make enough money to build a house and marry my mother.  So these potatoes were indirectly responsible for my birth, two years later?

The photo is black-and-white, and I don’t know the color of the truck.  Nor does my mother remember.  It will be red, though, because my father loved red vehicles.  (Gray or gold cars especially annoyed him. “They blend right in to the highway,” he declared, and if I bought such a car, it was an accident waiting to happen.)

So now the weaving is underway, and the level of detail is very difficult in the Helena Hernmarck technique I am using.  Many details have to be abstracted, of course.  I have a full-sized sketch of the major lines below the warp on the loom, and a full-sized image beside the loom.  My husband Mike especially loves the creases and folds of my father’s clothing.  He comments so frequently that I might have to make another regular tapestry, just of my father in this stance, to try to get the shading of his pants and jacket done realistically.

I see mistakes in my completed areas, and know what I should have done differently.  I think the potato bags are going to turn out well, and look like they are bulging with potatoes and my father’s dreams.

I don’t like to include photos of partly-done projects, because then I feel like people are expecting them to be done.  It’s harder now, because I’ve taken on a new challenge since early June, as the interim Education Coordinator for the Weavers Guild of Minnesota.  The long-time beloved education director, Linda Hansen, left to pursue her own art career.  I have stepped in until the beginning of 2015, when the permanent Education Coordinator will be in place.  Basically, I will hire myself out of the job.  During part of my time in the position, Becky Franklin, our super Managing Director, will be out on maternity leave.  What a great opportunity I have!  It’s definitely challenging.  It’s also inspiring to see the work done by students in the classes, and this summer to see the breathtaking tapestry of Aino Kajaniemi in the Textile Center Gallery right outside the Weavers Guild office.  (See my review here.)

Without concentrated time to weave, I am going to MAKE myself weave just a few rows each day.  Here’s how far I am.  It lacks perfection, but embodies a great deal of learning, and love. 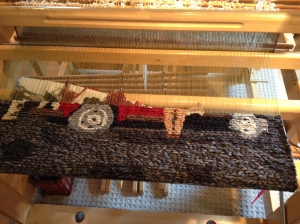