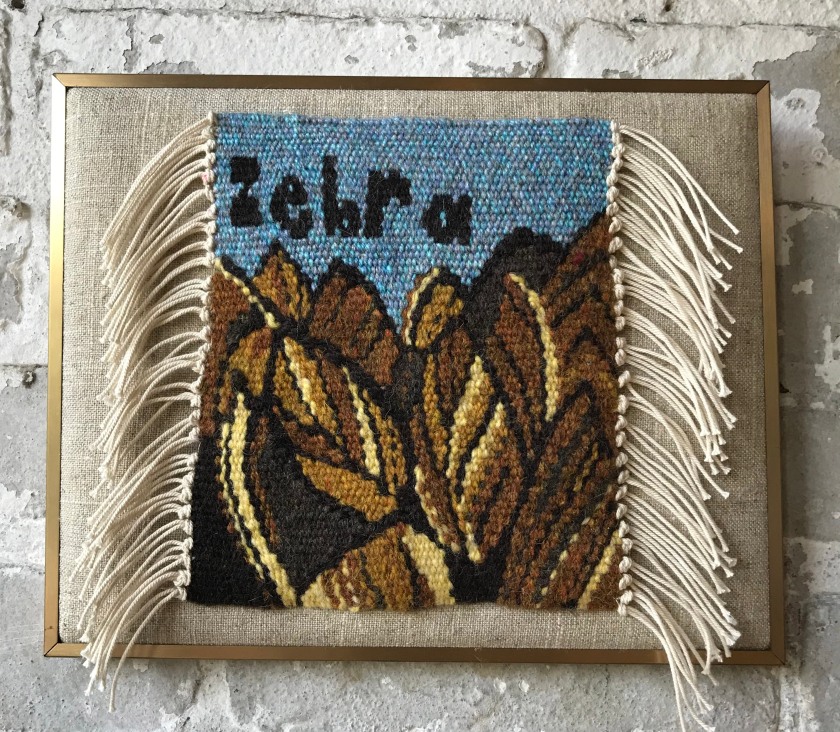 In real life, these abstracted zebra mussels, underwater in a Minnesota lake, are tiny. Described by the Minnesota Department of Natural Resources: “Zebra mussels are small animals with a striped, D-shaped shell composed of two hinged valves joined by a ligament. The shells are typically one-quarter inch to one and one-half inches long, depending on age, with alternating yellow and brownish colored stripes.” 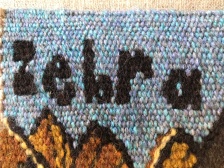 Last summer (2017) I read a particularly frightening series in the Minneapolis Star Tribune invasive zebra mussels, “How the Scourge of Zebra Mussels Spread Across Minnesota.” The tiger-striped mussels reproduce in clumps that clog boat motors and water treatment facilities.  The shells break down into shards that make beaches sharp and unpleasant. And as further described in the article:

The thumbnail-sized mollusks spread rapidly, and silently but relentlessly upend the fragile ecology of a lake. They smother and kill native mussels. They strain out and consume tiny, edible material, robbing native fish of a fundamental link in the food chain. They excrete a carpet of waste that fosters the growth of hairy, stinky, toxic mats of algae. 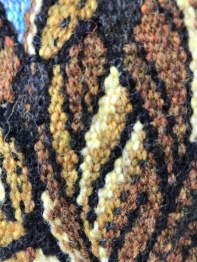 I knew about zebra mussels, but the details in this series made me think about my  childhood, and how I assumed that the lakes and the environment would always remain the same. And now everything is fragile.

As a child, I viewed the biggest outdoor threats as woodticks, poison ivy, and leeches lurking near the shore at Lake Bemidji, ready to leap on the legs of unsuspecting children. Summer evenings on the farm my mother would check each of her children for woodticks. My cousin and I would grimace at the huge blood-filled ticks on her dog. All that seems so innocent and innocuous compared to the really scary tiny deer ticks that can damage people’s long-term health.

During my long career at the Minnesota Legislative Reference Library, I was one of many who monitored periodicals for articles of importance to legislators and staff. My set of topics included agricultural and environmental issues. Over the years I read about pollution, climate change, and invasive species. At every turn, our state was beleaguered. Earthworms. Purple loosestrife. Climate change means snakes will come further north. Sea lampreys! And who could even believe the stories of flying carp leaping out of the river to smash against boaters?

The zebra mussels are the start of a series… Next up: the eastern larch beetle and brainworms in moose.

Naked Glimåkra tapestry loom. I don’t mind the warping process, but I REALLY want to be underway with the first of the #valleygrovetapestries. #tapestryweaving #billedvev #tapestrweaversofinstagram #weavingmn
When Cora came from Vermont, I asked if there was anything she wanted to do in Minnesota. “I want to learn to weave,” she immediately replied. My tapestry loom wasn’t ready for a project so we went to Chiaki O’Brien’s saori weaving studio. As the name implies, it is “Studio Fun”! Cora said about four words during her two hours of pure concentration. #kidsweaving #saoriweaving
Eight-year-old granddaughter Coralie has been with me for a week and a half now. Here she is happy with her pajama pants, just waiting for the elastic and hems. This afternoon she’s been exploring fancy computer-assisted stitches. She has amazing powers of concentration. My own projects have been out the door during Cora’s many projects. #kidssewing #pajama-pants
Sampling is good! This is for the center of one of the Valley Grove tapestries. It’s a bur oak tree in honor of the oak Savannah that is being restored around the churches. More at robbielafleur.com. #tapestryweaving #billedvev #valleygrovetapestries #valleygrovechurch #tapestryweaversofinstagram #weavingmn #weaversofinstagram
I now have a swim shirt, because I am spending a lot of time with Fitz in the big pool. The Grandma Death Grip is no longer needed. I’ll never forget his stunned look the first time he realized I wasn’t holding his hand and he was floating freely in his water wings. Seven-month-old Eleanor is truly excited by water.
Some angels in corners of Norwegian tapestries from the 1600s. There will be angels in the corners of my Valley Grove tapestries too. More at robbielafleur.com. #valleygrovetapestries #valleygrovechurch #billedvev #tapestryweaving #tapestryweaversofinstagram #tapestry #norwegianweaving #scandinavianweaving