While my main purpose in Norway is to study the transparency technique of Frida Hansen, I take every opportunity to see tapestry and traditional weaving. Anne Stabell is a contemporary Norwegian artist who uses open warps in her tapestry, as Frida Hansen did. Since Anne spends half her time in Germany, I was lucky she was in Norway this month.  I visited her at her studio in Skien with my weaving school friend, Inger Berit Myhre.

Followers of tapestry may recognize Anne Stabell’s name from her pieces in the most recent Cordis Prize for Tapestry Shortlist Exhibition in Scotland. These amazing large pieces are woven with nylon on wool warp.

She tries to translate the feeling and experience of being in the woods through the use of pattern, color, and scale. She works from personal experience and from literature. How can she capture her magical moments in the woods? How can arcs of woven threads represent movement of trees? She is interested in creating pieces that reward those who see the work from a distance, and those who examine them close-up.

In her preparations she looks for a path to her feelings about the subject and then to the way she will be able to bring them to life on her loom. Preparation time is long, as each piece is carefully planned. Yet, she tries to hold her process open as long as possible, working both as the composer during the design phase, and a musician through her interpretation.

She uses only natural dyes now, for the third time in her career. She began in the 1970s, when it was popular, started again in the 1990s—“When no one else was doing it”—and now. She documents her dyeing carefully; boxes of perfectly-wound samples contain her exploration.  She often dyes several fibers together in a skein, with beautiful results. 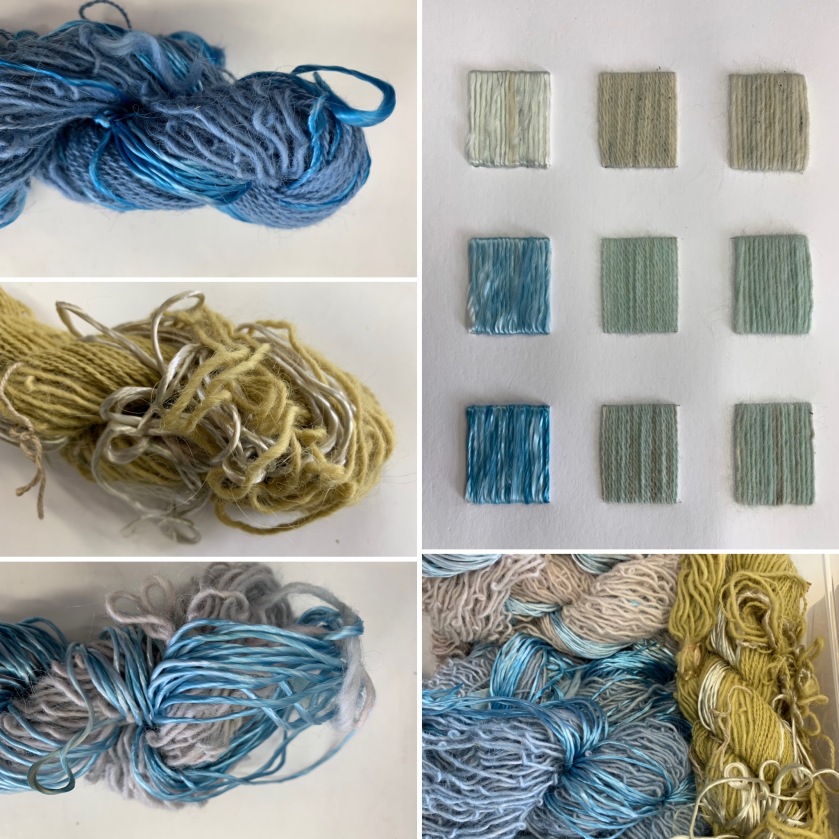 For an upcoming exhibit in Hamar at Kunstbanken, the Hedmark Kunstcenter, she will weave a series of pieces dyed with one type of natural dye, from one material, from one place, on one day. Here is a sample dyed with birch from Troms.

Her studio is spacious, but still not big enough to have her large works on display.  On the loom now is a large piece for the Hamar show (the pressure is on!). The warp is 3-ply Hoelfeldt Lund Norwegian yarn (not available any longer) at 5 epi.

This close-up highlights the beautiful variation in the warp colors. When Anne first started her open warp exploration around 2003, she used white warps; later she moved to colored warp, always hand-dyed, sometimes with ikat. I asked about whether the nylons yarns slip–it seems like they might… She said they stay in place, but it helps to make many turns.

She only has a portion of the cartoon in back of the weaving now; here is the rest. 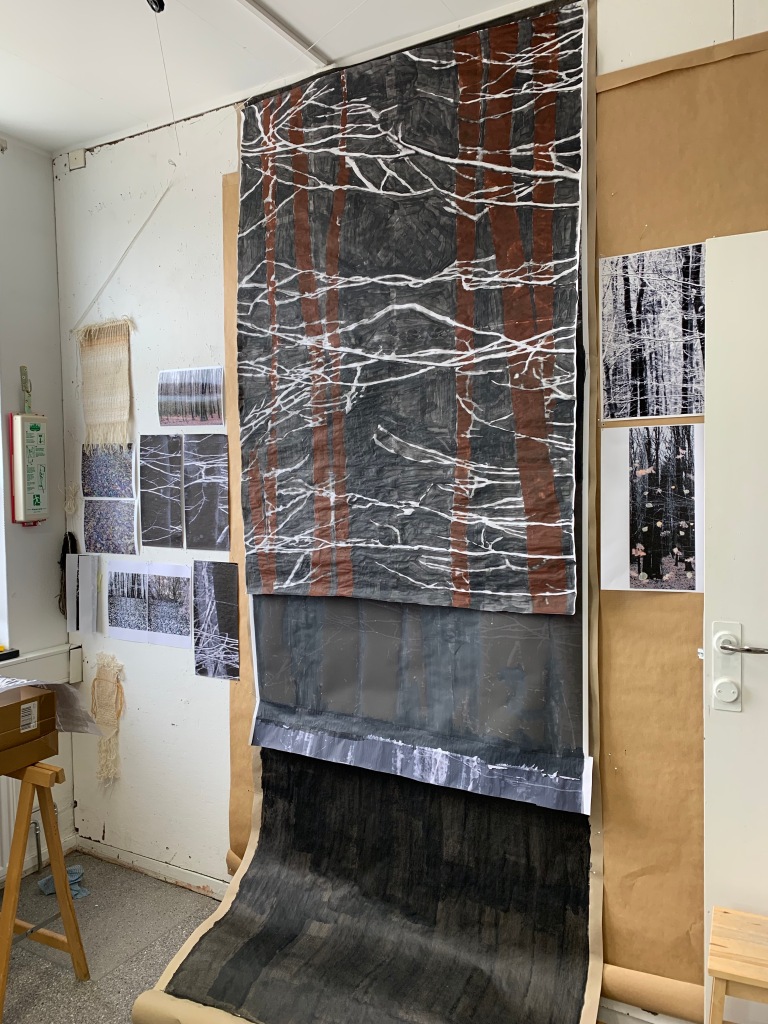 The exhibit at Hamar Kunstbanken, “Slowly Through the Woods” (August 24-October 6) will feature several large works, and Anne has been planning their placement with a sweet, small model. Making architectural models of her exhibitions helps her to become familiar with the spaces. “You think better with your hands,” she commented.

We looked through an album of some earlier works, and she described a transparent tapestry from 2008, “World Web.” This was during the Bush era, and instead of showing the United States in the center, as if often the case with flattened-globe images, China is in the middle and the U.S. split on each edge.

And now, my friend Inger Berit asked, maybe the U.S. wouldn’t show up at all? Diplomatically, Anne ignored that and instead showed us the next page in her album. In “Whales World Web,” all the continents are negative space and the focus is on the oceans and their currents. The continents are ikat-dyed open warp threads.

Anne said that she was not familiar with Frida Hansen when she began her work with open warps in tapestry. Maybe, she guessed, it was because her art school degree was in costume design, and not weaving.  She learned to weave from her mother and grandmother.  Later she learned all about Frida Hansen and her work through Anniken Thue’s book and seeing Hansen’s work on exhibit.  She read that Frida Hansen felt it was important to use wool warp and weft yarns that were spun in opposite directions—the warp z-spun and the weft s-spun—in order for the threads to grip one another, and not slip into the open spaces of the transparency.

Maybe it’s best that Anne Stabell wasn’t familiar with Frida Hansen’s transparencies when she began her experiments? Maybe she wouldn’t have tried her experiments with nylon yarn?  The use of shiny nylon on wool warp has become a trademark of her work. The weft does not slip in her art pieces if the work is handled carefully.  Anne conjectures that it might be more important to have the z-and-s-spun wool when weaving more utilitarian pieces like the portieres woven by Frida Hansen and her followers.

In contrast to the tightly-spun in Frida Hansen’s work, Anne sometimes uses “ullspiss,” a slightly fuzzy singles yarn, for the warp.  It works fine. Her upright tapestry loom uses weights to hold the warp tight over the top beam; for the singles yarn she uses slightly lighter weights.

This was a marvelous visit to a talented artist.  If you’d like to read more about her work, she was interviewed for the Textile Curator site, here. Finally, I like to peruse bulletin boards in studios; here’s a great quote from Anne’s board. 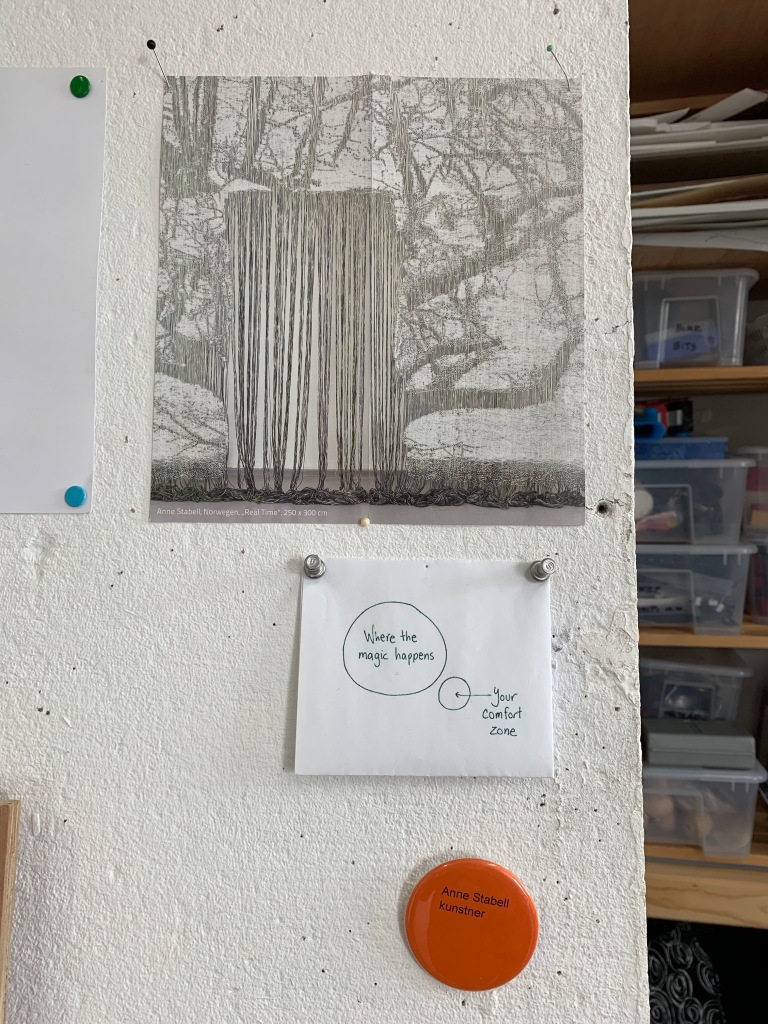