Every time Wynne Mattila teaches a rug weaving course at the Weavers Guild of Minnesota, the slots are gone in a blink.  She is an exacting instructor and also enormously happy to be in the classroom. As Wynne has said, “I like to talk.” The result is that her students gain a lot of knowledge and have a fun and memorable experience.  This semester’s “Wynne class”—as in, “What’s the Wynne class this semester?”— was krokbragd.  Clearly, the straight path to learning the crooked path pattern (krokbragd) was taking Wynne’s class.

I visited on the last day, when some students had rugs off the loom and ready to be photographed. Everyone was excited to tell me what they had learned, and how they approached their rug designs. All of the rugs were woven on 8/5 linen warp at five ends per inch.

Karen Mallin, who told me she had waited more than a YEAR to take the class, wove a 68” long rug, even longer than she first planned. She used 3-ply Paternayan wool rug yarn, of a type that is no longer made.  She received a mound of the yarn, in a rainbow of colors, as a gift.  It was a great gift, because she estimated that if she had purchased the 18 colors she used, it would have cost nearly $500.

As Wynne advised, Karen began by laying out all of her colors on a table and sorting. She realized she had enough yarn to weave similar bands in four colorways: purple, turquoise, green, and blue. She sorted by the intensity of the colors, so the deepest intensity of one color would meet the deepest intensity of the color in the next band.  She began by graphing out the entire rug, but then—as so often happens—adjusted the pattern after more thought and experimentation. She added the pop of gray and orange between each color, a visual interruption as well as a device to bring the patterns together.  She had the least amount of purple so she began with that color, to see if she would have enough to weave a wide enough band to meet her planned total length. When she realized that band would come up short, she redesigned the center of the band to add the sort of heddle design. That part was a “design at the loom”  decision.  Happily, it made the design more elaborate, and more pleasing overall. 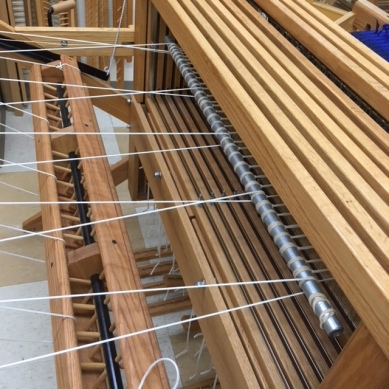 Originally planned for 60”, the rug turned out to be 68”.  She barely squeaked this out! When warping, Wynne suggested 36” of loom waste.  Calculating the correct warp length is a tricky business; you don’t know exactly how much take-up there will be.  How hard would she beat?  How would the yarn beat in?  With Karen’s additional design elements, she came to the end and realized the rug would be longer than she expected.  This called for ingenuity at the loom.  She loosened the warp slightly and slid in a shorter back beam that would fit in between the sides of the shafts. She took off all the heddles from the (unused) back four shafts, and then she wove right up to the back of the remaining heddles.  Whew!  She might not have had even one more inch of warp left to weave.

Ann Masemore didn’t have a lot of yarn, partly because some of the colors were not available when she ordered her 3-ply Halcyon rug yarn. She did not graph out her pattern completely before she began, and designed many elements along the way, at the loom. Ann started by dividing each yarn in half (one part was set aside for the second half of the rug.)  As she wove her rug, she recorded the design on graph paper to ensure it was symmetrical.

She now plans to make a 5’ x 7’ rug, which will require much more planning, because of the amount of yarn that is needed.

Jo Hill claimed she doesn’t like math and graphing, so she chose pattern elements along the way, guided by an inspiration photo of a mountain and sunrise.  Even though she felt there was not enough of a darker blue shade because she ran out, the rug was quite successful in evoking the feeling of a pale sunrise rising from the deep mountain shades.

Kala Exworthy said this was the first rug she has woven in thirty years, since attending a Folk School in Norway.  She used Harrisville Highland yarn, tripled, which gave her a terrific color selection.  Because Harrisville yarns tend to “bloom,” or fluff out, when wet-finished, she is looking forward to seeing the rug after steaming.  She also promised to take before and after photos.

Nancy Fulton used 3-ply Halcyon rug yarn and chose twelve of the nineteen colors in the Desert Sunset pathway. She noted that computer-generated colors are not always true, and that she wished she had chosen from a yarn sample card, as two of the brown colors ended up being almost the same, without the contrast she hoped for. (Look at the very center of the rug.) She started out by graphing her full pattern, but as they say, the best laid plans… After weaving the first half of her rug she realized that she would not have enough yarn to continue her intended pattern to the end.  So she shortened the length of each color by about 1/3.  Then when she ran out of red yarn for one band, she extended the design by putting in a shot of each of her blue shades. The result was the addition of marvelous interest to the overall pattern.  Nancy praised Wynne’s teaching, “She has so much knowledge to impart, and she is so good at coming up with ideas.”

Mona Phaff was weaving a “secret mission rug,” a Christmas gift for her husband.  It will be 68”, and use thirteen colors.  Her design is based on a pattern from one of Wynne’s rugs.  Mona put more yarn on a shuttle than I have ever seen!  Wynne recommended against using quite so much yarn, but Mona said that even though the shuttle didn’t slide so well, she didn’t mind. This photo of Mona at the loom shows something that is often true of krokbragd (and many weavings): the visible weaving you see on the loom is often so different that the total look of the piece when it is completed. It will look quite different when the yarns in her bin are added to the loom.

It was a privilege to meet with the students at the end of this class.  Wynne said, “I try to tell my students everything I’ve learned over the years about rug weaving.  I’m always so pleased with their rugs—I have high expectations and my students do not let me down—they continue to inspire me.”

At this point I’m sure many people are saying to themselves, “What’s the Wynne class for the Winter/Spring semester?”  It’s her popular Raanu Rug course, beginning with after the new year.  Sign up soon!