Weaving provides endless challenges – although  I wish I could just remember all of the previous lessons I should have learned.  Many of my future posts will deal with lessons – wonderful things learned from weaving friends, and painful and expensive lessons learned at my own loom.  But for now, here are some tips I wrote down during the halv-flossa class this summer. 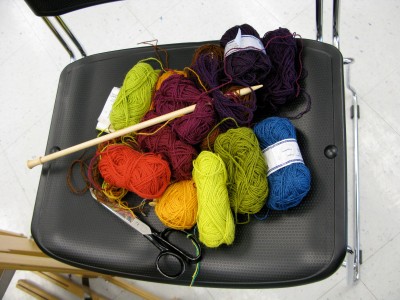 With linen there is 10% take-up or loss when weaving.  With wool there is a 20% loss, because of the elasticity.

I thought I would have to beat hard in order to cover the background.  Ingebjorg heard my swift, hard bangs across the room and said, “Are you in a hurry?”  Instead, I was packing down the threads way more than necessary.  “You’ll use too much yarn,” Ingebjorg noted.  Veronna remembered a weaver in the South who said of herself, “I beat like I’m killing rats with a broom.”
In the Faroe Islands, they use the meat, and just burn the wool.  In the Falklands it is the opposite – they use the wool and discard the meat.

Don’t take warping shortcuts.  Do it the right way.  The final product will be much more satisfactory, and the weaving more enjoyable.
Once you begin weaving, and you want to make sure you aren’t pulling in, walk to the back of the loom and eyeball – the warp coming off the back beam should follow accurately all the way through the heddles, reed, and to the edges of the beginning weaving.
Sally had some problems with slack edges on one selvedge.  One trick to solve an area of looseness is to work with a few threads near the problem edge, actually working them and moving them apart to try to spread the weft more evenly among them.  You can also use your fingernail to “scrape” the threads in towards the center.
If you have a loose edge, almost a loop, on an individual shot, you can pull up the weft threads on the warp near the edge into a little bubble, and redistribute them.
If an edge thread becomes loose and slack, you can go back to the heading, catch the thread with a t-pin, twist the t-pin a few times to pull it tighter, and fasten it into the header fabric.
It’s legal to pull some knots out if an area seems too dense!  Both Veronna and I found that sometimes a blank space within a pattern seemed completely filled in, and it helped to pull out a few knots (or a lot!).
Wash fine linen at no higher that 140 Degrees farenheit.
Ingebjorg told the story of her grandfather giving advice to her two aunts.  To the one who was so accurate and fretted he said merely, “Count your blessings.”  To the other he said, “If you succeed, carry on.  If you don’t succeed, carry on.”  Ingebjorg told me this story when I had forgotten a square of pile and was about to tediously place it in with a needle.  We were reminded also of the poster in the local ice cream shop, taken from a British WWII poster, “Keep calm and carry on.”
Ingebjorg notes that cod should not be eaten in months without an “r” in it.