My loom will be moving to Northeast Minneapolis soon, for a grand experiment.  Beginning in October, I will be sharing Room 316 in the Casket Arts Building with my friend Chad Breckenridge. This is an amazing and serendipitous development, precipitated by Chad’s studio-mate moving on.  I’ve often wondered whether I would gain focus and ambition if I took the loom out of my distraction-filled house.  That has been the experience of my friends Kala Exworthy and Ann Masemore, who share space in the Northrup King Building.  Working at home has been great, but Mike may also be happy to reclaim some of the upstairs space.  Sometimes the only way to sort yarn is to place it all around on the floor.

Chad will be the perfect studio-mate – partly because he’s hardly ever there!  He works there every Friday.  He’s a photographer and spends time adjusting and printing his work, but not actually taking photos in the space. His long table holds a computer and printer. Film and paper and framed photos are under the table and on nearby shelves.

Even though it seems like a loom, desk/worktable, and yarn should fit fine in the remaining space, I don’t want to take up more than my fair share, and I want Chad to be happy I am there. “Chad,” I warned, “weaving includes a lot of stuff.”

He didn’t seem too worried.  “Oh yeah, skeins and things.”

“There will be weavings all along this wall.”

Chad’s wife (and my friend) Sally Brown has her painting studio on the same floor, which will be inspiring.  I told her it was exciting to think about weaving away from home, but that it also felt like quite a bit of pressure, as if I had better produce.  She stepped away from her large, Rousseau-like painting and patted me on the shoulder.  “Don’t worry; you’ll be fine.  On the first day, just come to the space and sit and read a book. Get to know it.”

Launching the new studio  reminded me of my sister Barbara’s friend Hanson.  A year ago he read my star charts, somehow based on when I was born, the alignment of the planets, and something about Jupiter.  He predicted a really good couple of years coming up for creative endeavors. My note from the trip said, “Things are looking good because of the Jupiter moon, and Pluto crossing it, something like that.  The Jupiter moon is just plain good. Jupiter and Pluto and Pluto are approaching my Mars.  It will be lit up for me over the next couple of years, enhancing the warrior aspect within me.”  Well, OK! 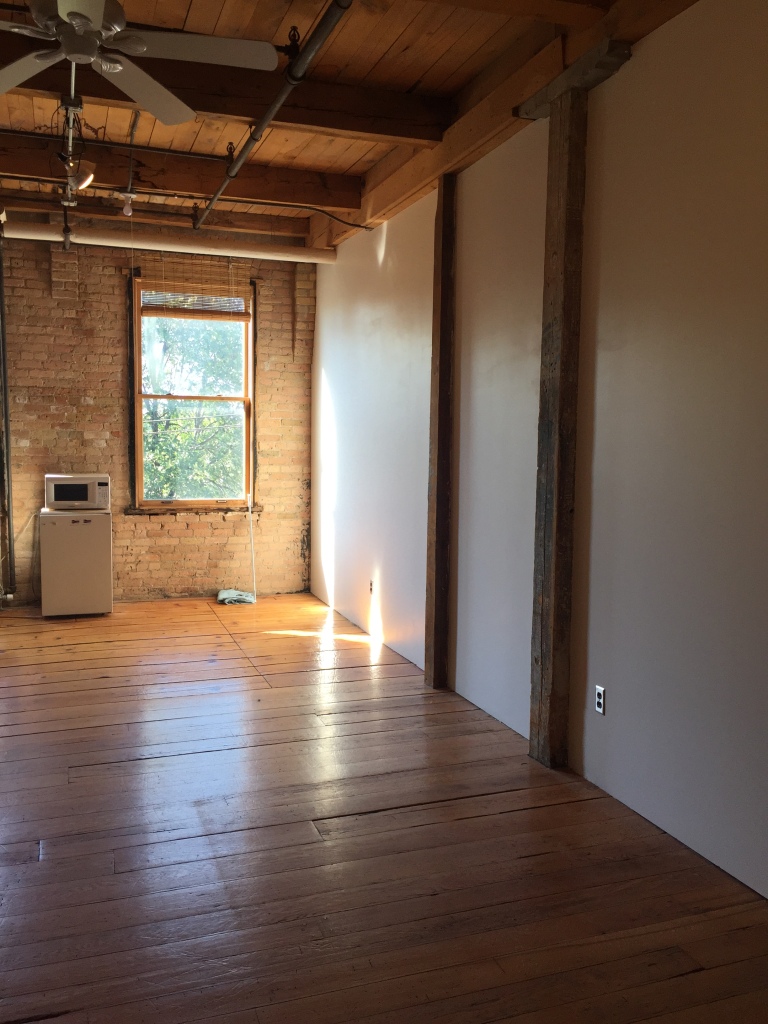 Right at the time I made this studio decision, I started a piece on the loom.  Now the pressure is on to complete the weaving so that the loom can be dismantled and taken to its new home.  As eager as I am to make the move and set up the space, I also realize that not everyone will be happy about the change.