I wish that so many of my linen-loving weaving friends could have been with me at Hørvævmuseet, a linen weaving museum in the heart of Denmark.  The museum is staffed by dedicated volunteers who are passionate about the collection of jacquard looms, with educating visitors about the processing of flax to linen, and the history of linen production in Denmark.  Appropriately, each cafe table features bundled flax wrapped in linen. The museum is housed in a former cowshed of a large estate. The looms and equipment, from a linen mill that closed in 1972, sat unused for 33 years until it gained new life. 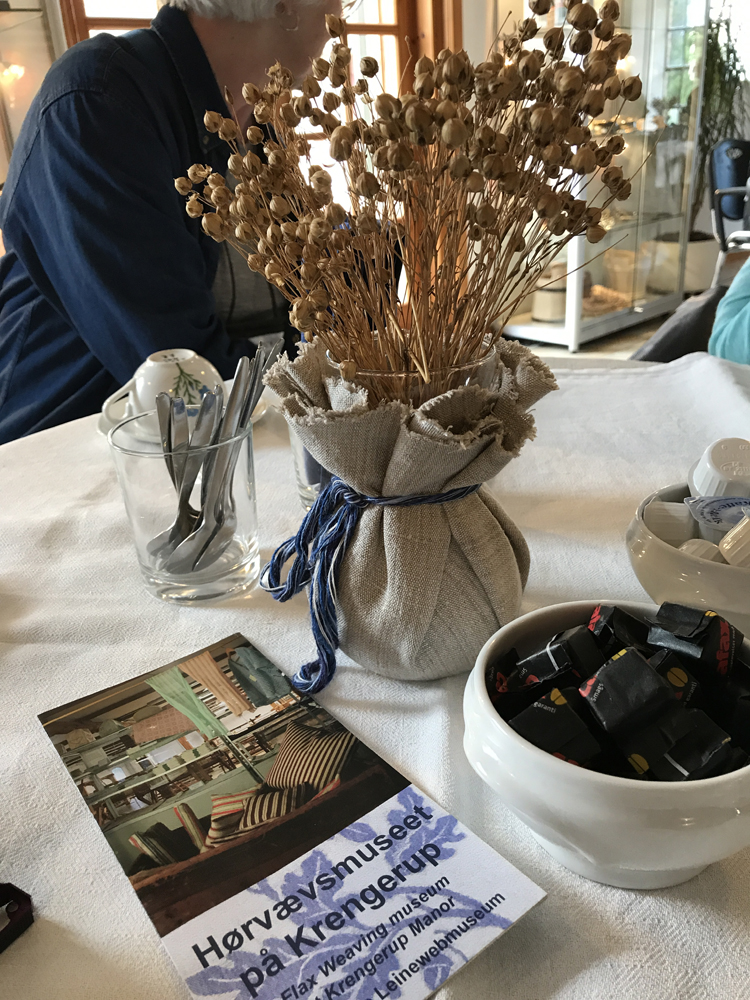 Our super guide was Lis Brandt; she was funny and intense and very knowledgeable. She related the history of two linen mills; one that began in the 1920s, and the other 8 years later.  One included a spinnery, but it ceased. When World War II began, the borders closed, and goods were difficult to acquire. The farmers began to grow flax again, and delivered it to the mills. In exchange, they would receive yardage, which would be used for sheets, clothing, and other linens.

After the war, when more textiles were available, linen growing stopped again, and eventually the mills, too. “After 1945 my mother and those of her generation forgot about the fine quality of linen,” Lis explained. Now the only people growing flax, according to her, are “crazy ladies, like my friends,” who grow small plots. Here is a bit of flax, blooming next to the museum wall.

As Lis stood beside this loom, she waxed poetic about the fun of adding a new 5000-thread warp.  Oh, there’s nothing so fun as warping. What!?  Oh yes, she assured us, it’s a very special time.  You can’t leave your post and the others have to bring you coffee. They don’t rethread, but splice the threads of the new warp to the end of the last warp, because who wants to rethread 5000 threads through the heddles and reed? They use oil and chalk.  Again, what?!  It’s like caulk that you use in windows, she explained.  You put the oil and chalk mixture on the old end and new end, twist them, lay it down flat, and twist it a bit again. The former weaving mill owner told Lis that his mother was able to tie on 1000 threads per hour in this way.  Lis timed how long it took her to tie on a 1500 thread warp, and it was 20 hours. 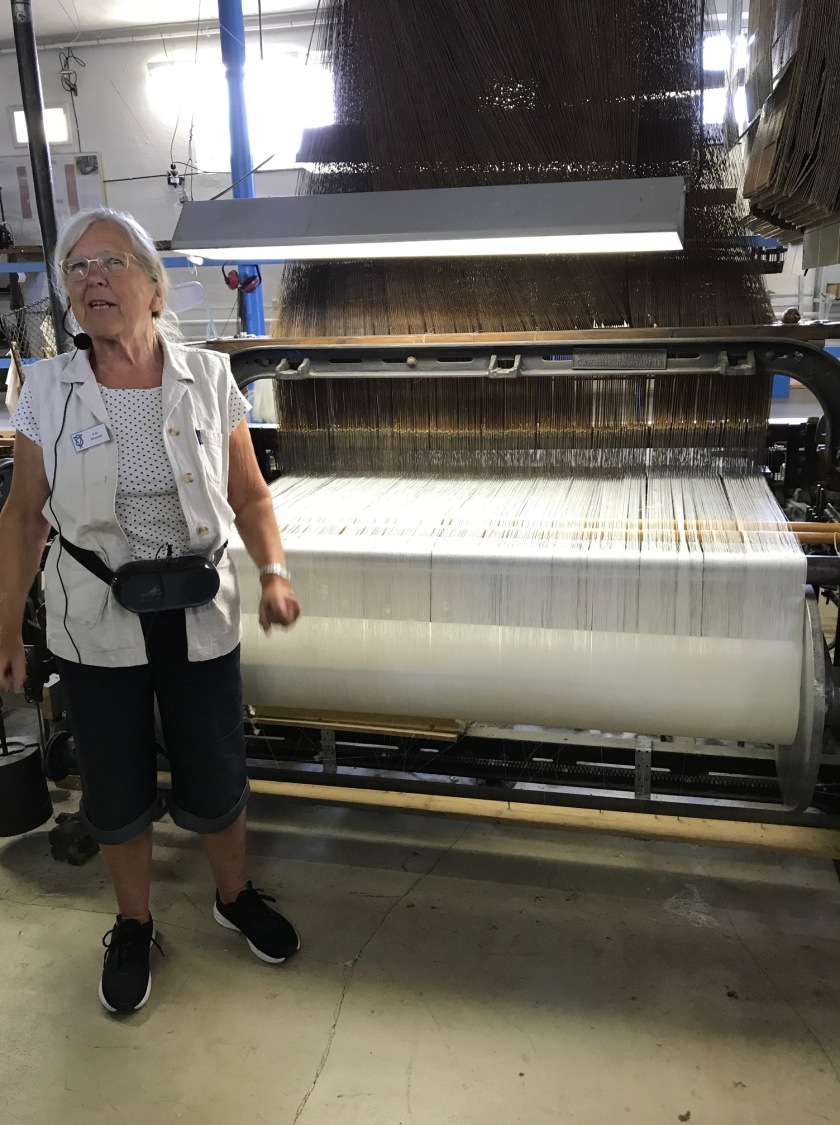 This is a working museum, and the tablecloths and runners produced on the looms are for sale in their shop.  Most of the volunteers with time to devote are local people, older rather than younger. One man who repairs (and climbs up and down) the giant looms is 89.  So we need younger people, Lis said to our group.  People retire in Denmark when they are 67, “So if you are 67, you are just the young apprentice we need!”

The warping mill was a serious piece of equipment, pulling threads from dozens of spools.  As there are no longer any linen spinneries in Denmark, they generally purchase their warp thread from Belgium, and the weft from Sweden. 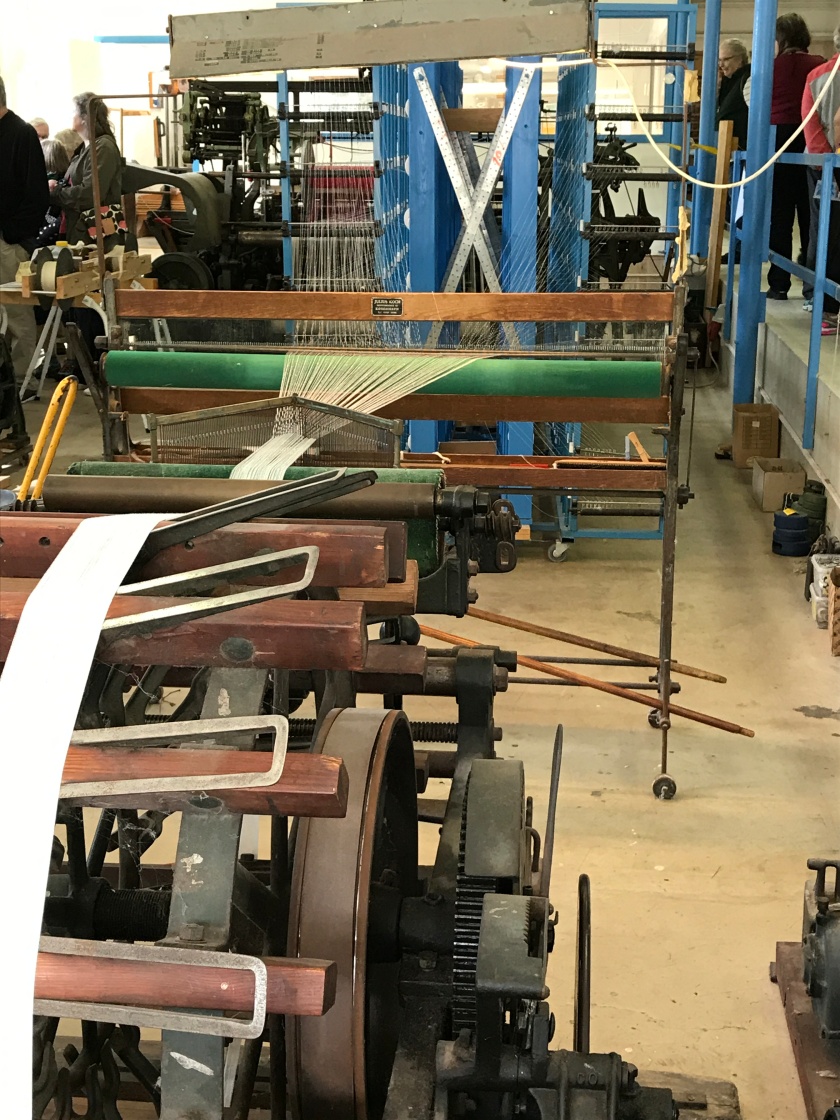 The volunteers come in on Mondays and Wednesdays, and weave as much as they can. This is a small runner with many Danish symbols.  I wanted to purchase one, but I didn’t realize that I needed to RUN to the gift store to compete with the other tour participants.  I’m glad the museum made a pretty penny off our group.

This warp was experiencing some problems, and the sign says to leave it alone (must not be started).

After the Jacquard cards that control the patterns on the looms have been in place for about 50 meters, of cloth, they are put on a frame and checked for damage.

If a card is damaged, a new one is made on another machine.

Lis demonstrated the preparation and spinning of linen.  It’s a dusty business, and she said, “This is the corner where we can make a mess.” Here she is scutching, breaking the stiff outer casings of the flax stems to expose the fine, long fibers within.

In an outer room, several large trunks held examples of beautiful striped linen ticking. One of the explanatory cards nearby said that if someone was weaving the bedding fabric and was unsure how the pattern should look, the weaver would stop and wind colored threads around a stick in different colors. When the weaver decided how the stripes should appear, the work could commence.

Lis inserted so many interesting facts in her tutorials about the preparation of flax and the weaving of linen.  For example, she emphasized that it was tricky to soak the flax stems, which needs to happen to soften the outer casings; the danger is that the flax will rot and be spoiled.  Plus, if a horse drank the water in which the flax was soaking, it would be poisoned.

Everyone in our tour group left full of information and inspiration–and bags of linens, too.