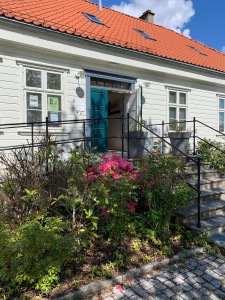 It’s a privilege to be in Stavanger, Norway, with time to study and write and weave, thanks to a fellowship with the American Scandinavian Foundation. My immersion in Frida Hansen’s transparency technique has begun. I’m also thankful to the Rogaland Kunstsenter (Art Center) for allowing me to stay in the apartment at Frida Hansens Hus.

I visited the Stavanger Art Museum on Tuesday. Frida Hansen grew up in Stavanger, and the museum is home to eight significant pieces. I felt especially lucky to have the room of tapestries to myself, as a new exhibit is being mounted in the museum and it was closed to the public. The director, Hanne Beate Ueland, found me a small folding chair, and left me to begin my study.

I saw this room during a Norway trip in 2017, and saw even more works at the Hansen retrospective in 2015.  I took many photos on both occasions, and I’ve examined them thoroughly.  Still–now that I have set myself the task of learning the technique and speaking about her work, I saw so much more in each tapestry.

They are displayed beautifully; the four pieces in her signature transparency technique are mounted about six inches away from the walls, creating beautiful shadows. In this technique, sections of the tapestry are left unwoven, and you see the exposed warp threads.

Hansen wove “Havfruer” (Mermaids) in 1921, one of her later pieces.

Mermaids stand atop one another, reaching above the sea. But doesn’t it seem more colorful and shiny in the deep sea than up in the mortal world?

It’s interesting  how the open warps create light and dark spaces, depending on their placement. Look at the blue woven water; the pale beige warps are light in contrast.  Within the mermaid body, the slight gaps around the scales are dark and set off the light scales. 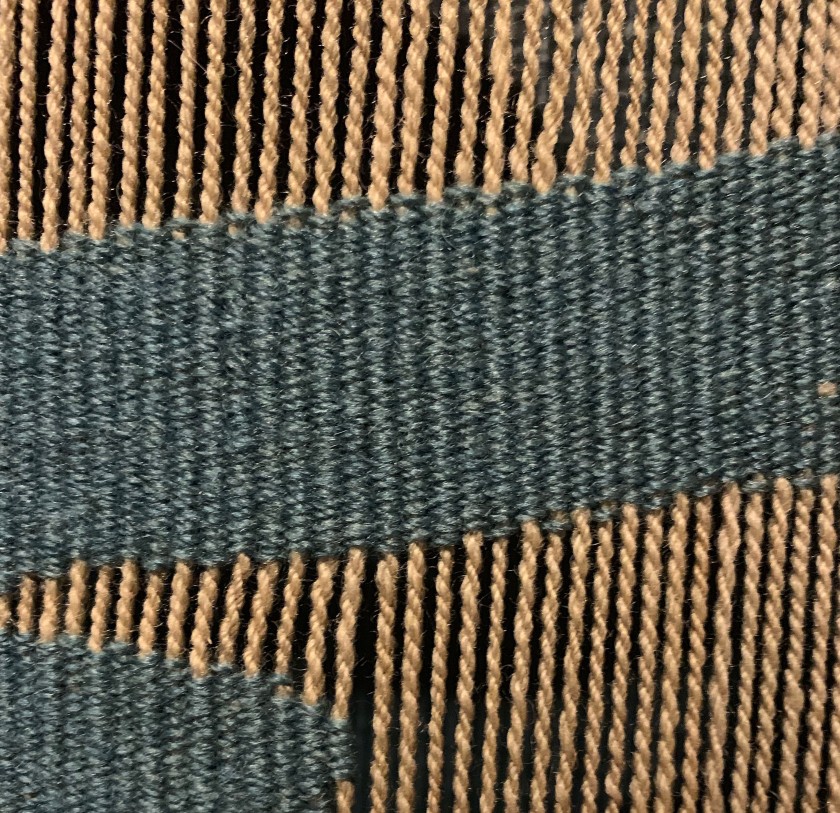 The fan-shaped mermaid scales are wonderful.  Some incorporate shiny yarn (silk?) to add a fishy, watery iridescence. As a weaver, it’s interesting to see the effect of scale.  From afar, the scales looks evenly fan-shaped.  Up close, however, you see that many are fairly blob-shaped. 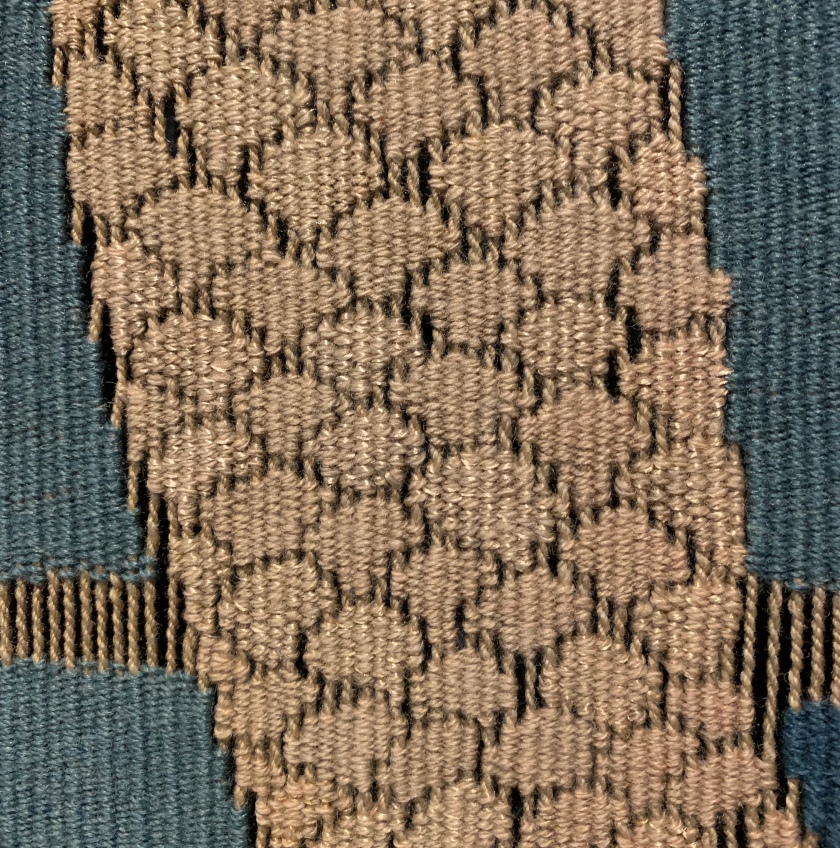 Within the watery area there are larger areas of open warp. Above the water, where the mermaid reaches to the flowering trees, there are only narrow lines of open warp. To me, the open parts on the bottom give a watery, wiggly effect. 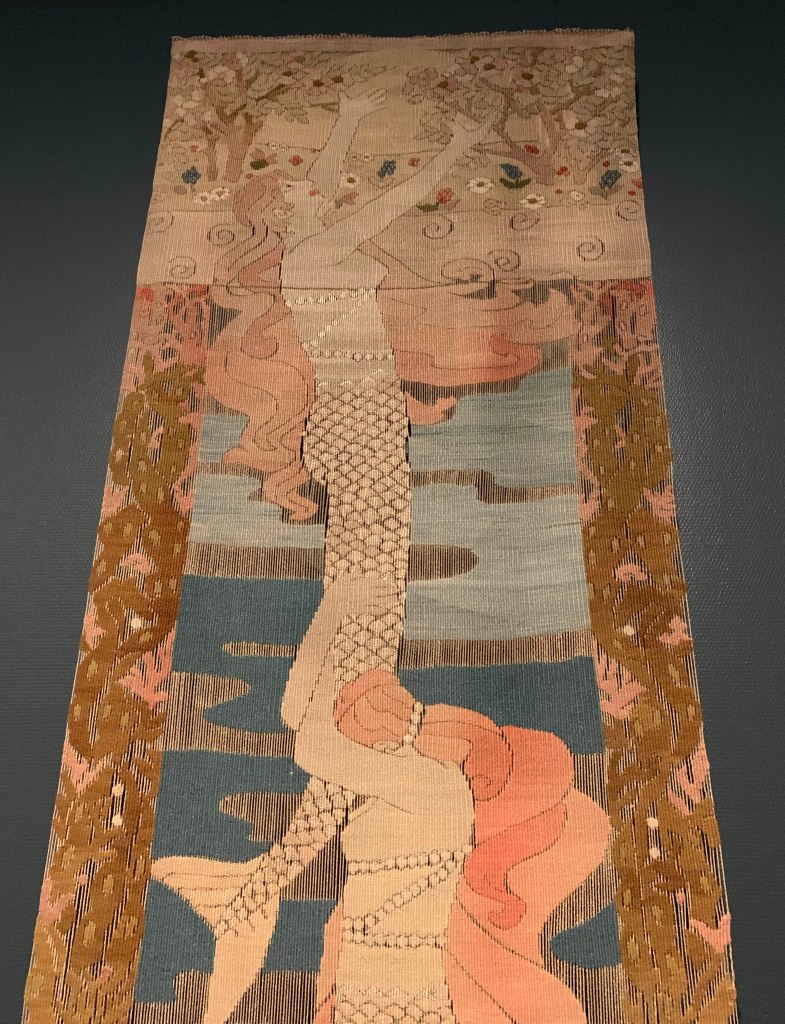 Here is a close-up of a border.  The pink shapes among the brown (not shown in this detail) probably depict coral. 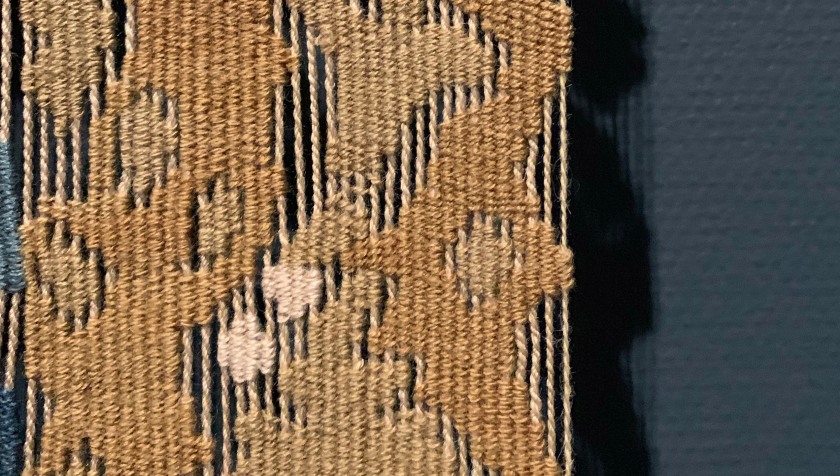 All four transparencies have fringes at the bottom, in various stages of deterioration. “Havfruer” was the only piece that did not have fringe at the top also.

In the coming days I’ll write about the other tapestries; follow along if you would like to read my weaverly comments.

Next week I will visit the archives of material on Frida Hansen, compiled by Anniken Thue when she was writing her wonderful book on Hansen in the 1970s. Again, such a privilege!

Now, could we just get a bit warmer, sunnier weather?  Everyone tells me that up to the day I came, it was shorts weather. Still, the spring flowers have been magnificent. 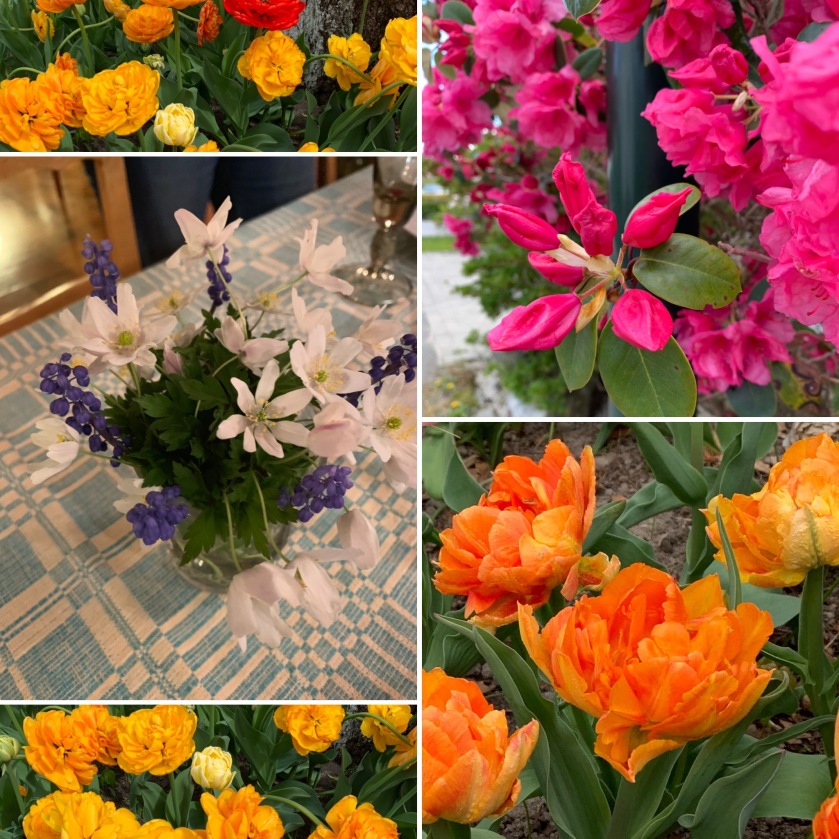