Perhaps I am sitting here in Stavanger on Syttende Mai, after enjoying a wonderful meal of oxtail soup and wine and cake at the home of my friend Ragnhild Wathne, because of one of the founders of the Weavers Guild of Minnesota, Hilma Berglund (1886-1972).

Hilma enjoyed a long career as a weaving instructor at the University of Minnesota, and even patented a floor loom she invented, but the reason I mention her is because she wove a pair of lovely curtains in transparency technique which captured my attention more than a decade ago. Her weavings and papers are held by the American Swedish Institute (ASI), and the panels were on display in a turret room of the ASI mansion.

I loved them!  After some time, they were taken off display, but more recently, I was able to examine them closely, because I know all the right people (Phyllis Waggoner). They are woven with embroidery floss(!) on a cotton warp, and have remarkably beautiful color variation because of the ability to blend several strands of thread. Her meticulous records reveal that she spent $19.47 in materials and 480 hours weaving them.

At the time I didn’t know much about Frida Hansen; I think I had seen a photo of “Melkeveien,” her most famous work, but not much else. Then in 2013 I attended a conference in New Orleans and visited the New Orleans Museum of Art, and the exhibit, “Inventing the Modern World: Decorative Arts at the World’s Fairs, 1851-1939.” One of the 200 items on display was  “Blue Roses,” which was one of Frida Hansen’s breakthrough works at the Paris Worlds Fair in 1900. So captivating!  It was at the Paris Worlds Fair that Frida Hansen’s transparencies were introduced to an international audience, to great acclaim. 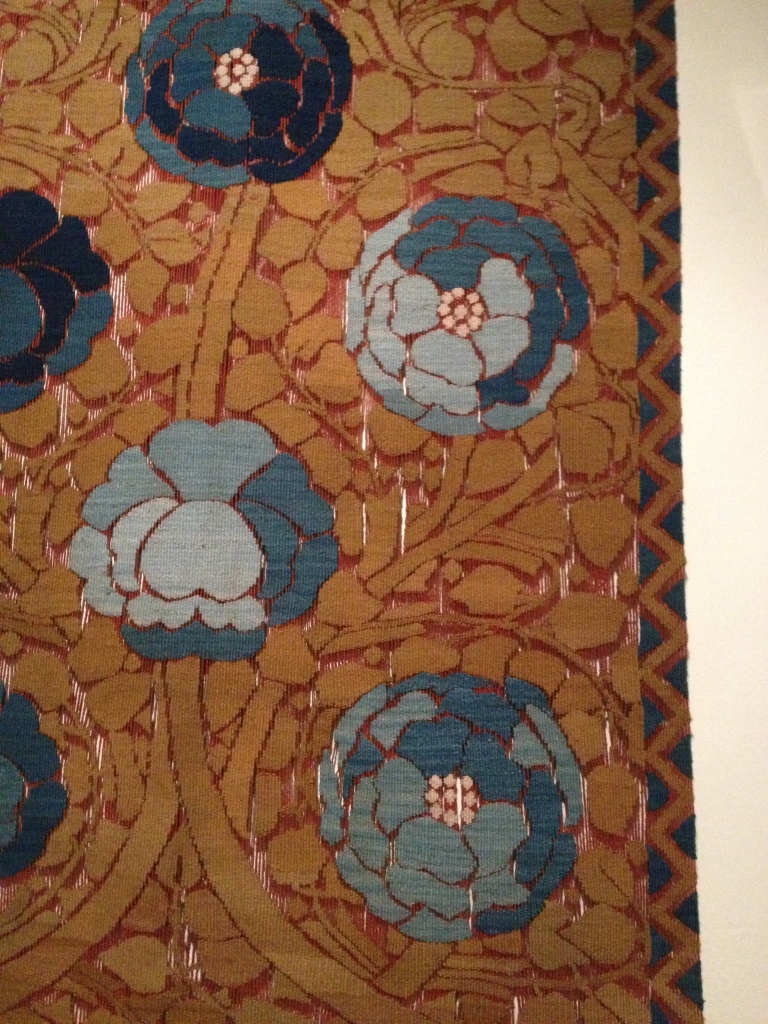 In the coming years I learned more about Frida Hansen. I traveled to the retrospective of her work at the Stavanger Art Museum in 2015.

It occurred to me that Hilma Berglund, in weaving her transparency panels with open warps, might have been influenced by Frida Hansen’s work, and had perhaps seen it. She studied weaving at Handarbetets Vänner in Sweden in 1922.  I spent an afternoon at the ASI reading through her meticulous diary, and sure enough, Hilma Berglund was enthused about seeing Frida Hansen’s work at the Danish Kunstindustrimuseum in 1922.

Went to the Art Industry Museum.…A curtain filled with a dandelion motif was especially attractive—warp, gray, used for background and ribs in leaves, yellow for flowers and buds, a lighter gray for seeds, and two shades of green for leaves.

She even added a tiny sketch to her notes.

This was the design she saw, “Hesteblomster” (Dandelions), another of the pieces exhibited at the Paris Worlds Fair in 1900. You can see the dandelion heads that match Hilma’s sketch in her diary.

Later, in an unpublished manuscript about Hilma Berglund’s life in the collection of the American Swedish Institute, there is a direct reference to the link between Frida Hansen’s work and Hilma’s draperies in transparency technique.

And now I am studying Frida Hansen’s technique closely. When I complete a large transparency, perhaps it could be shown with Hilma Berglund’s earlier work–a sort of Frida Hansen influence circle in Minnesota.

And finally, a quote from Hilma graces the wall in a gallery room at the American Swedish Institute. So true.