When you walk into the gallery devoted to Frida Hansen at the Stavanger Art Museum, “Semper Vadentes” hangs prominently, with four figures leading you out again. Not only out of the room, but as Frida Hansen suggested in a 1907 interview, the figures represent “man’s restless wandering out toward the ocean of eternity, which gleams in the distance.”

Each carries a symbolic item–a money bag represents riches, a pearl necklace for vanity, a candle for eternal love, and violets for beauty and art. Frida Hansen’s biographer, Anniken Thue, suggested that the lowest-placed figures represent money and vanity, earthly concerns. The higher figures stride toward true love and art. Flowers were Frida Hansen’s passion and inspiration, so it makes sense that they represent art in the hands of the upper figure. Perhaps this was a self-portrait? Along the borders, flames of eternal light are entwined with the roses of love.

I never tire of admiring the beautiful pattern detail in Frida Hansen’s work.  Here are close-ups of two skirts in “Semper Vadentes.”

White circles in the floral areas add texture and interest.  They are not all the same. The colors of the circles vary, too. The letters at the bottom are in different shades.

One admonition in much of weaving is to make sure you have enough yarn; perhaps you won’t get the same dye lot with the next batch.  Of course that matters with some types of weaving, but in the hands of a master, using slightly different shades within similar sections of a whole design adds life and dimensionality, as in these blue sections in the borders. It could be that areas of blue have faded at different rates, but still, I think there was variation.

The flickering aura around each candle along the borders is slightly different.  And roses; so often roses appear in Frida Hanson’s tapestry world. 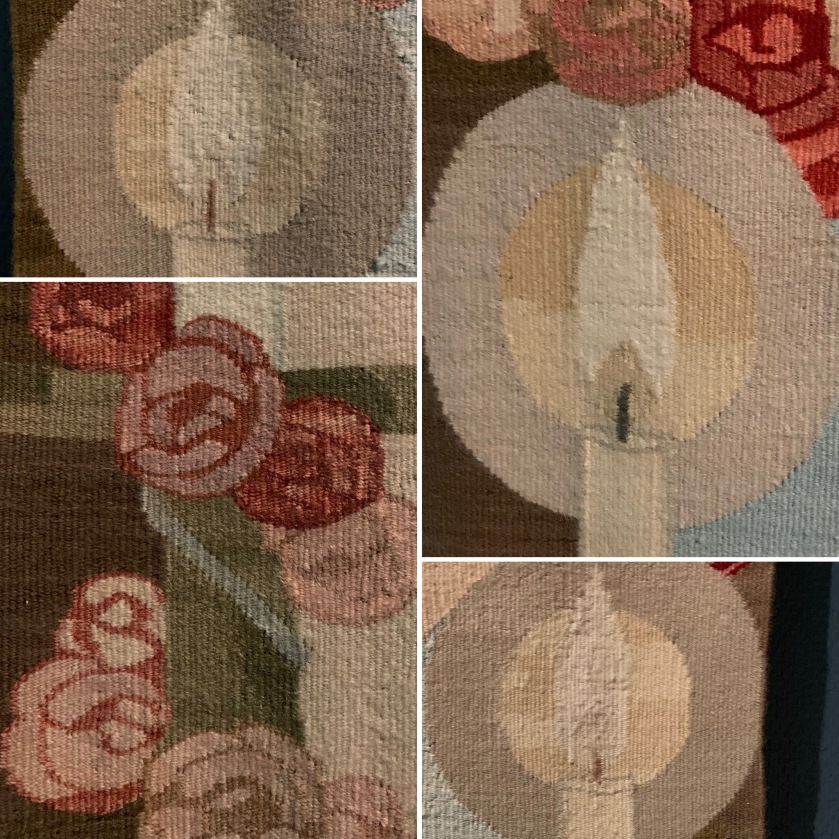 Finally, weavers like to see edges; there is a nice pick-and-pick border at the bottom of “Semper Vadentes.”  The tapestry is wool on cotton warp.