My American Scandinavian Foundation fellowship in Norway was to study the beautiful wool transparency technique of Frida Hansen,  but there are many weavers who have explored the use of open warps with tapestry, internationally and in Norway.  Here’s a handful of Frida Hansen’s fellow Norwegians.

One of the Norwegian weavers influenced by Frida Hansen was Else Marie Jakobsen  (1927-2012). Most dramatically, she wove a two story high commissioned tapestry for the Science Building at the University of Bergen.  Her piece celebrates the weavers who have gone before her, including Frida Hansen, Synnove Aurdal, and Hannah Ryggen, and all the unknown weavers through the centuries.  Her huge tapestry, filled with red, warms the interior of the Brutalist style cement building. If you visit Bergen, be sure to seek this tapestry. If you get really close to examine the weaving and the warp—the alarm will sound! Here are two details.  A longer description of the tapestry translated from the book by Janne Leithe on Else Marie Jaobsen, Vevd Liv (Woven Life), will be published in the next issue of the Norwegian Textile Letter, (due at the end of August, 2019), along with many more photos. 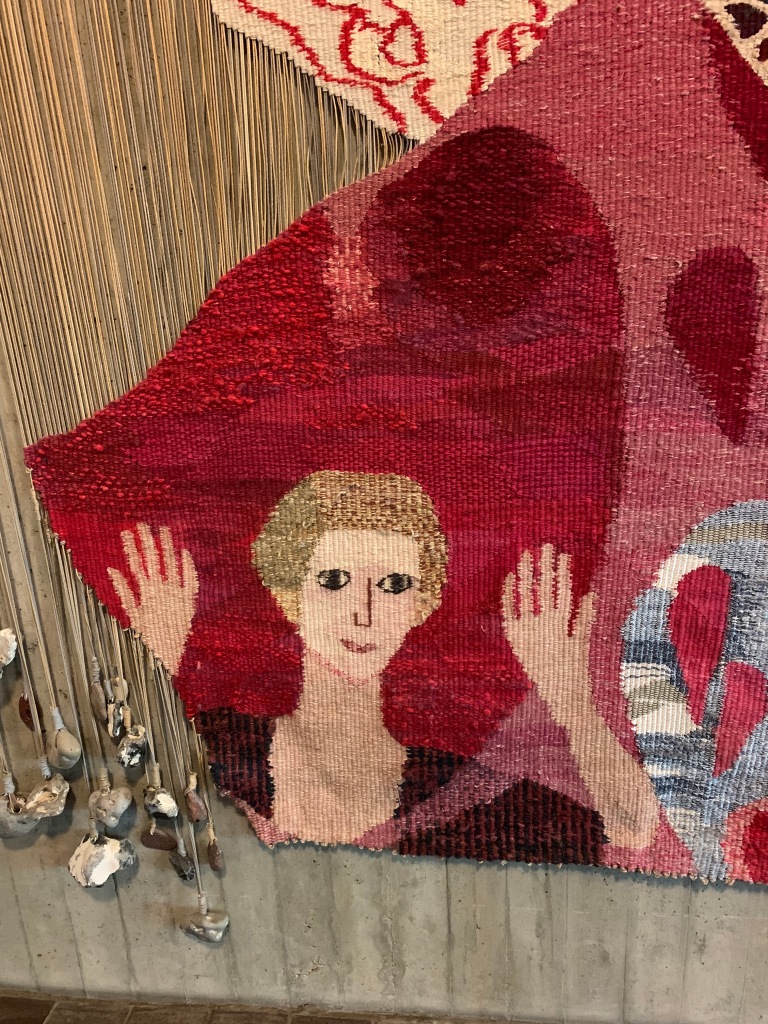 Anne Stabell is a contemporary weaver who began her exploration of open warps before she was acquainted with Frida Hansen’s work.  See more of her work in an article I wrote when visiting her studio, “Anne Stabell’s Magical Warps.” And oh I wish I could visit her upcoming exhibition at Kustbanken, the Hedmark Kunstsenter, beginning August 24. 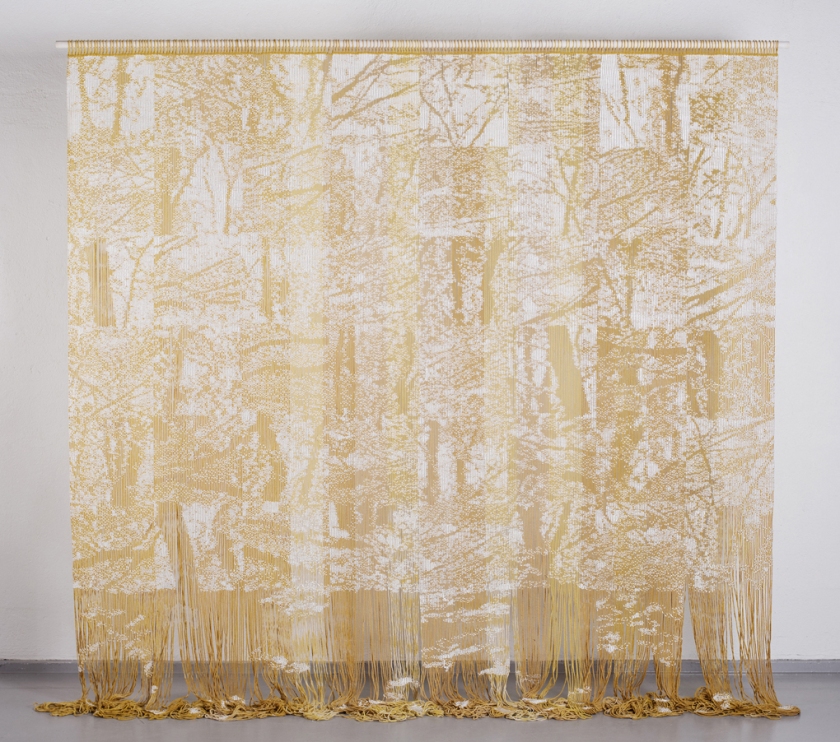 I feel joyful every time I see Tonje Høydahl Sørli’s work; cartoon characters hang from open warps, their backs a mass of dangling weft. Many are left in frames of the tapestry looms on which they were woven, metal Hagen looms which the artist finds, left over from the seventies.

Elise Storsveen had a show at the SOFT Galleri in Oslo earlier this year, with a tapestry of eyes in the front window.  Eyes peering out at visitors peering in?  I wrote to ask her if she was influenced by Frida Hansen. Yes, she responded, as a relatively new weaver she looks to the old masters for tricks. 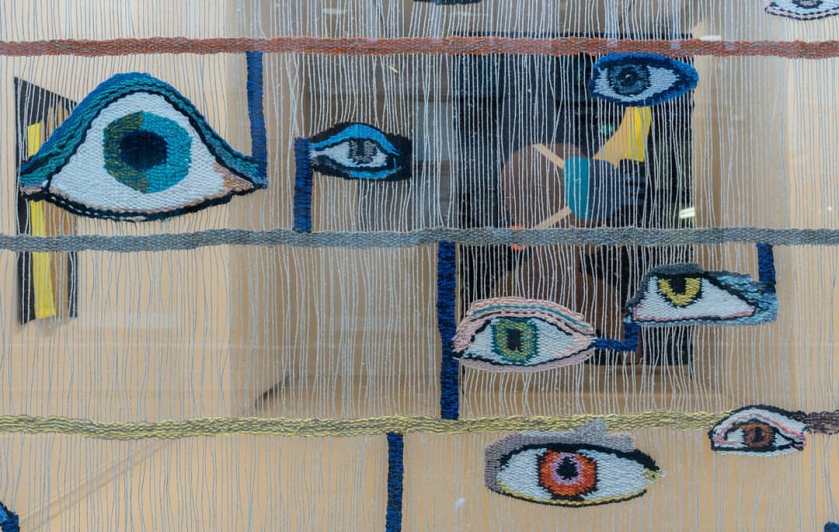 It’s all inspiring for my own exploration of open warp tapestry. The potato plant is almost done…..

¾ done! A monksbelt runner on the Megado loom at the Weavers Guild of Minnesota. I just finished my favorite part—the blue and green checker-boardy section. #weaversofinstagram #weaving #scandinavianweaving
Almost to the center of this long monksbelt runner. Will the colors come together in a pleasing whole? I’m optimistic. #handweaving #handwoven #monksbelt #weaversofinstagram
An Aubusson tapestry from a Fernand Leger image, at the Jane Kahan Gallery in NYC. So beautifully woven. More tapestries from the gallery in my blog, Robbielafleur.com. #tapestries #tapestryweaving #tapestry #janekahangallery #fernandleger
I wrote the text for a 12-page booklet to be published by Vesterheim Norwegian-American Museum. Soon you can see all the beautiful images! #vesterheim #vesterheimfolkartschool #weaving #scandinavianweaving #billedvev
A caricature woven in despair during inauguration weekend in 2017. Almost pretty, not my intention. So goodbye. Deconstruction. More in my blog, Robbielaeur.com #tapestry #tapestryweaving #tapestryweaversofinstagram
When I took this tapestry off the loom, my husband said, “Where’s her other leg?” ON THE OTHER SIDE OF THE HORSE! But check out the skinny legs in old Norwegian billedvev—it turns out the skinny legs are very traditional. #tapestry #tapestryweaving #tapestryweaversofinstagram #weaving #fiberartistsofinstagram #billedvev