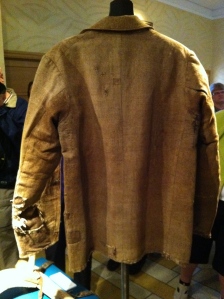 Who even thinks to repair clothing in our throwaway culture?  A mended textile tells tales.  It indicates poverty, or thriftiness, or the fact it’s difficult to give up a well-loved piece of clothing.  It can even give information about the daily life of its owner.  At the Icelandic National Museum there was an exhibit of mended clothing and woodenware. A man’s woolen work jacket had arms and front placket that had as much mending as original fabric.  It was even passed down to the woman of the house, whom the guide suggested used it while milking cows.  You can see patching done on a worn spot on the back of the jacked where the cow would have licked the jacket while being milked.  The story may be a myth, but it’s charming.

At the Museum Sunnhordaland Museum south of Bergen, we were shown mended garments again, clothes that had been found in houses in the district.  One dress, likely worn in the thirties or forties, was a stylish, fitted summer frock.  The woman wearing it likely wore it while carrying water to an isolated cabin in buckets hung on a wooden yoke.  Through the mending you can see two holes worn through in the shoulder areas.

P.S.  We visited the Oleana factory in Norway.  If my new sweater is damaged, it will definitely be mended!

The first of the #valleygrovetapestries is on the loom and underway. Read about the start of this animal and oak tree homage, and about how tapestry requires so much sampling, at robbielafleur.com. #tapestryweaving #tapestry #tapestryweaversofinstagram
The new issue of the Norwegian Textile Letter is up, with articles about symbols in Norwegian coverlets; an exhibit at Vesterheim Norwegian-American Museum; art Weaving in Valdres; tapestries in post-war Norway; and a "rag" rug with a very unusual weft. Norwegiantextileletter.com #norwegiantextiles #scandinaviantextiles
This is my cameo appearance at the end of a six-minute video I made on the iconic Wise and Foolish Virgins tapestry image (with cool contemporary versions too. The video is linked on my blog, Robbielafleur.com. Watch it and this clip will make sense! #billedvev #tapestryweaving #wiseandfoolishvirgins
In the latest blog post I link to a 20-minute talk I recorded for Vesterheim Norwegian American Museum on Norwegian billedvev, focusing on the pieces owned by the museum. https://robbielafleur.com/2021/08/18/investigating-norwegian-billedvev-an-online-tapestry-talk/
Last day in Maine. Not enough lobster yet, so we had a fabulous lobster roll at Scarborough Fish and Lobster. Highly recommended!
Arthur wasn’t so happy about sitting in the car from Wisconsin to Maine, but meeting the ocean was pretty great!