As part of an ambitious project to document and share their rich collection of artifacts, the Vesterheim Norwegian-American Museum is posting photos and descriptions online.  A portion of their archives is available now; here are rosemaled items on display to the world.  Coming later this summer – textiles!  According to Laurann Gilbertson, Textile Curator at Vesterheim, about 100 pieces in various textile techniques will be included.

The Museum has a deep and varied collection of textiles.  Some are on view in the museum, and many are carefully preserved in a climate-controlled storage unit.  For weavers, the pieces are a treasure trove for study and inspiration.

I recently posted a photo of a skinnfell coverlet with a textile attached.  Laurann sent along the details about it.  Sewn to the sheepskin is a tavlebragd coverlet woven by Regine Johannesdatter Bjerkvig of Stordal, Sogn, ca. 1875.  This could definitely be inspiration for a very contemporary-looking piece, more than 135 years later. 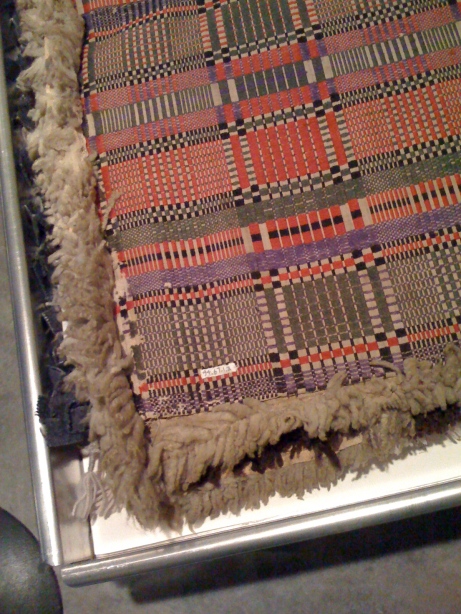