Skip to content
June 21, 2013 Robbie LaFleur Uncategorized Leave a comment
The adventure in Oslo continued Thursday with a trip to the Viking Ship Museum and the Norsk Folkemuseum. Kari Anne Pederson, Folk Costume Curator at the Norsk Folkemuseum, led an all-too-short tour of the folk costume exhibit and brought out examples of embroidered textiles. She made such interesting comments on the roles of various head coverings.  (I was enamored of headcovering stories during the last Textile Tour, too.  See this post.
Kari Anne pointed out a few kerchief-type head coverings from the area of Hallingdal.  She pointed out one intended for unwed mothers, which seemed pretty amazing and similar to adding a scarlet A to your chest.  Even more amazing, it was the right of the wife or girlfriend of the baby’s father to place the headcovering on the unwed mother.
Hallingdal was one of the last areas of Norway where married women continued to wear head coverings even up to the 1950s.  Kari Anne retold a story from Aagot Noss, who studied folk costume and clothing traditions throughout Norway.  Aagot heard of a traditional couple in Hallingdal in the 1960s.  As the husband’s friend came for coffee, his wife worked in the kitchen.  The visitor, looking around for his friend’s wife and fully expecting to see a woman in a kerchief, looked right past the bare-headed woman and said, “Where’s your wife?”  It seemed that the woman without a kerchief had become invisible to the friend.
Below is another remarkable use of an embroidered white kerchief, rolled in a tube and perched on top of a costume from Setesdal. 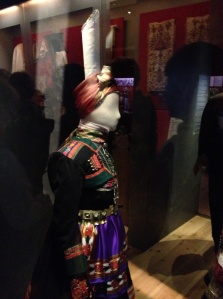 This evening I ate at Peppe’s Pizza (their motto is “The best time is that which you spend with friends) with my friends Mary and Glenn Skoy and Jan Mostrom.  That may not seem like a traditional Norwegian restaurant choice, but in a way, it is.  I ate at Peppe’s Pizza on my first trip to Norway in 1974, when a pizza restaurant in Scandinavia was more exotic.  Then, as now, it was a moderately-priced meal choice, and good pizza.  Of course, “moderately-priced” is relative.  For shared pizza and a round of beer, the tab for each of us was $35.50.