This is a follow-up to my post, Traditional Icelandic Rya Knots; A Contemporary Adaption, about the warp-weighted loom class I attended at Vesterheim this summer.

Four of the five pieces woven with Icelandic rya knots would have seemed quite unusual to our Viking weaving fore-mothers.  However, one of our classmates, Elizabeth Christianson, brought her own loom and warped it in a twill with four shafts – more technically ambitious than the rest of us.  She came with a plan, to weave a cloak in shades of gray to wear with her traditional Viking costume.  She wasn’t using locks of unspun fleece like the Icelandic Vikings put in their cloaks, but medieval women looking at Elizabeth’s woven shawl underway might recognize her as a kindred spirit. 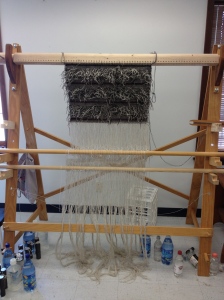 The Viking women would really be amazed at the warp-weighted ryas on the looms of the other four students.  My pieces were fairly controlled, but the final three rya-knot weavers used the Icelandic knot in a freer, painterly way.  They showcased color to create shaggy, enticing wall pieces.

My loom-mate Marty Davidsohn brought boxes with small bundles of hand-dyed yarns.  She began inserting them in a dark background and quickly realized a garden was being sown.  Beautiful Monet-like fields of flowers and sky emerged. 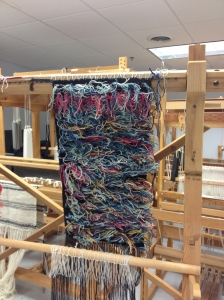 The piece is shown vertically on the loom, not quite complete.  It will be hung horizontally. An interesting part of the process was the discovery that the back of the piece could be used as another vantage point to study the piece while it was underway.  The smooth color on the back helped Marty to evaluate whether more pinks might be needed, or a larger portion of another color. 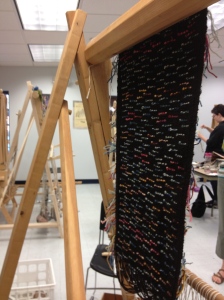 The other two weavers using Icelandic rya knots were directly across the room from Marty and me.  Many times I turned away from my loom and was startled by the deep  and bright colors on the loom at my back.  I was most amazed by the pieces when they were only 5 inches, or 15 inches long. 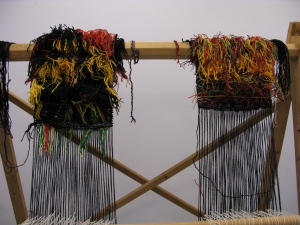 I had no idea about how the color paths would unfold; it was just crazy color.  What was next, I wondered, and then turned back to the puzzle of my own piece.  In the end, the results were surprising. Oh, THAT’S why that band of color was there, I realized.  How much of the finished pieces were actually planned?  In large part, it’s like the poem fragment in a small watercolor I purchased in Norway many years ago,

Loosely translated – you never know where the road ends.  It happens with your choices along the way.  That happens so often with my weaving.  Here is the road-almost-ended in Donna Leet’s piece.  She still planned to add some more purple on the bottom. Fabulous!

Look at the bands of fire (my interpretation) in this great piece by Judith Sebesta. 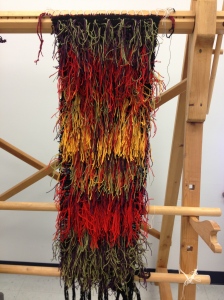 Many thinks to Laurann Gilbertson at Vesterheim for arranging this class, to Marta Kløve Juuhl for teaching and inspiring us, and to my fellow students for so much inspiration and learning and fun.