Does this happen to you – when you know that housecleaning is on your agenda, hundreds of other tasks can suddenly become so pressing? A similar thing often happens to me when planning a large project and getting it underway.  This time I have a larger tapestry underway on my floor loom, and everything about its preparation seems to take days; the warping, the choice of yarns, working with the cartoon.  One day I came up with an idea for a tiny tapestry; a little test, a little sketch.  While I am only on the header on my main project, I finished the tiny tapestry.

Our granddaughter Madeline, eighteen months old, lives in a house with great music playing a lot of the time.  She takes advantage of it, and she has moves.  Really great moves, which we see in occasional videos.  I wondered whether I could capture her precocious James Brown-like groove, so I used an app to parse out the frames of one of her dance videos.  I chose this one.

This became the cartoon. 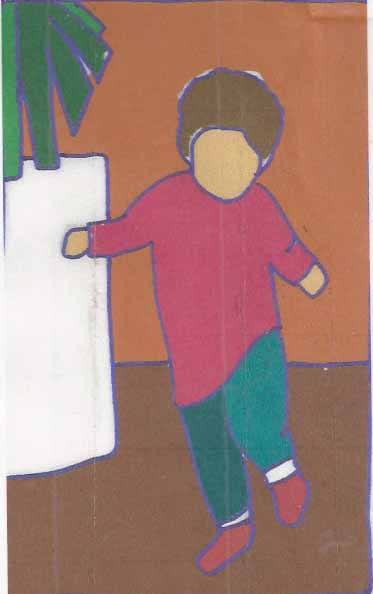 I think I captured a bit of the movement, though I lost a bit of the babyness of her body by beating so hard; she became slightly skinnier than intended.

I think I’ve finally found a combination of gray yarn colors that will approximate the color of a Red River Vally potato field at harvest time.  So – on to the next piece.