The display up at the Weavers Guild of Minnesota through April 12, 2019, “Scandinavian Tapestry Treasures from the Collection of Carol Johnson,” is divided into broad categories, for the sake of arrangement on the walls.

The categories are: people; buildings, landscapes, and ships; floral; abstracts; and animals. “Other” was a useful final category to display some figurative pieces that aren’t strictly tapestry.

I’ll relate any stories or information I have about the pieces Please let me know if you have more information about the origin of the cartoon or about people who have also woven the images.

The People category is largely a female category, with more women than men represented.  The weavers, whose names we do not know, were also most likely women. Carol Johnson bought most of her pieces via eBay or estate sales, so there is little provenance. Read more about Carol’s passion for textile collecting in an article in the Norwegian Textile Letter,  “A Passionate Pursuit: Scandinavian Weavings from the Collection of Carol Johnson.”

Let’s start with men. In this one a fisherman sports a striped sweater and jaunty nautical hat. Is he delivering fish?

Another man and more fish here, but not as detailed as the fish above.

These dancers are woven in Norwegian rutevev, a single interlock geometric tapestry weave structure. This piece is likely designed by the Norwegian designer Else Poulsson, who worked for Den Norske Husflidsforening (the Norwegian Handcraft Association) from 1929-1954.  (If anyone could verify this, I would be happy to know.)

A man and woman are framed in two small tapestries, surrounded by a floral border.  It’s a segment of a well-known Swedish tapestry cushion pattern, “The Engagement.” The pattern for this weaving is found in Flemish Weaving: A Guide to Tapestry Technique, by Gertrude Ingers (NY: Van Nostrand Reinhold Co., 1971, originally published in Swedish, 1967).

There are some men with imposing hats in this procession to church.

A single man’s head is a reproduction of a detail from the famous Norwegian Baldishol tapestry (and not Jesus, as some have thought). Read more about this image in my post, “59 Tapestries: Homage to the Baldishol Tapestry.”

One man is featured in this Norwegian piece, in which there are only five wise virgins depicted; perhaps the foolish ones were woven in a companion piece? It is beautifully woven in a lovely palette, though the front is somewhat faded.  (If you are not familiar with this iconic image in medieval Norwegian tapestry, this article from the Norwegian Textile Letter is informative, “Virgin Tapestries and the Bridal Theme.”

I put this very abstract tapestry in the people category because I think it is three musicians–and perhaps male?

Two of the tapestries represent a Swedish holiday. I posted a photo and a query about them on the Swedish weaving Facebook site, Vävspolen. Kirsi Frimanson responded, “This one is titled “Valborgsmässoeld.” In Sweden we light bonfires on the eve before 1st of May. This night is called Valborgsmässoafton.” Also known as Walpurgis night, it must have been a popular topic for tapestry; Inger Ridderstolpe identified another version on Tradera, an auction site. It is interesting to have these two tapestries on display together, because it is easy to see the different skill level of the two weavers.  The weaver of the bottom example was more skilled at weaving smooth gradations, while the shapes in the top piece are more jagged. 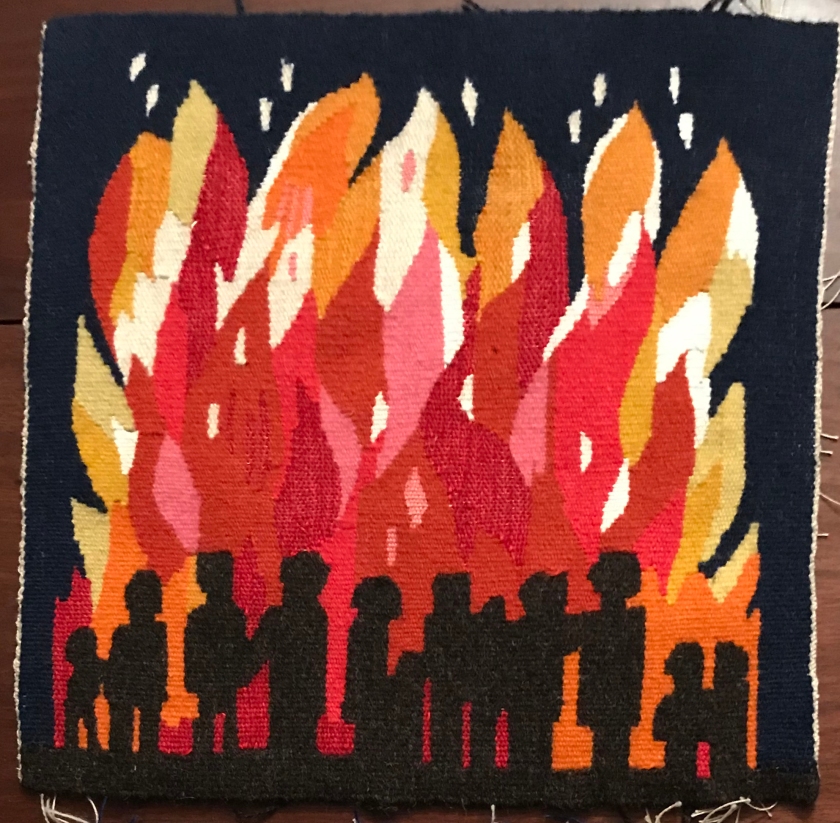 A final man in the people tapestry section–Joseph with Mary.

When Bodil Pålsson wrote on Facebook, “Jag har fått flickan i Bjäredräkten som present för många år sedan (I received the girl in Bjäre-costume as a present many years ago),” I assumed she meant this one.

Two small pieces depict a woman at a loom and at a spinning wheel. Ruth Nygard commented on Facebook that she also wove the images about 35 or 40 years ago.

A thin woman hangs laundry in a narrow, impeccably-woven flamsk.

These three figures are recognizable to many Swedes: tant Brun, tant Grön, and tant Gredelin, three aunts from a popular Swedish series of books by Elsa Beskow, published from 1918-1947.  (If you speak Swedish, or maybe even if you don’t, check out this crazy video on on YouTube to acquaint you with the aunts.) Perhaps this was sold as a pattern by Hemslöjd (the Swedish handcraft association), as a version of it is featured on the Swedish Digital Museum.  Click here. It is from the collection of Östra Skånes hemslöjdsförening.

Carol Johnson owns two versions of a woman’s head–the Virgin Mary, I assume.  One is larger than the other.

A Madonna and child.

This mother and child might be religious, or not.

This lady is with a bird, not a baby.

Finally, here is a row of four women in fancy dress.

I hope that many people will get to see the display.  But remember–call the Weavers Guild (612-436-0463) before planning a visit, because there may be a class underway in the room, making it unavailable to the public for viewing.