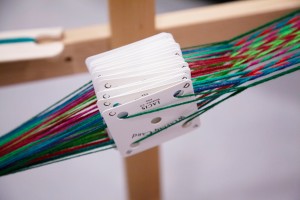 The new issue of The Norwegian Textile Letter marks its 25th year, and the fifth year of publication in digital format.

It includes a book review of the best sort–in which the reviewer tests out the instructions and reports her success.  You’ll want to get out your tablet weaving cards after reading Helen Scherer’s review of Tablet Weaving–in True Nordic Fashion by Sonja Berlin.

At the depths of winter temperatures during our Midwest polar vortex this winter, Martha Brummitt was assembling a Viking-style pram boat. Next she will be weaving the cloth for an authentic wool sail.  Read about her project and follow along on her adventure in “Building a Norwegian Pram and Weaving a Wool Sail.”

I am part of the planning committee for a great new textile show at Norway House in the summer of 2020, “The Baldishol: A Medieval Norwegian Tapestry Inspires Contemporary Textiles.” The Call for Art is officially released with this issue of The Norwegian Textile Letter. The show will include textile works inspired by the tapestry.  Perhaps one by you?

Expert background on the Baldishol Tapestry is included from a section of Art Historian Randi Nygaard Lium’s book, Norsk Tekstilkunst (Norwegian Textile Art)–“Baldisholteppe: A Treasure from the Middle Ages.”

This Norwegian historical treasure has been replicated many times. In 1926 a copy was purchased by a group of Norwegian-American women to present to President Calvin Coolidge and his wife.  This event was researched thoroughly by Norwegian journalist Hermund Kleppa. His article, “The Baldishol Tapestry in the White House,” originally appeared in the Kulturhistorisk Leksikon (Cultural History Encyclopedia), published by Fylkesarkivet i Sogn og Fjordane (the County Archives of Sogn and Fjordane).