I’ve been planning to weave a blue horse tapestry for years. As I developed the cartoon, I took elements from a number of medieval Norwegian billedvev (tapestry) pieces. I’ll document my process in a series of posts about this “Medieval Mash-up.”

A recent post showing my warped-up loom, and then the piece underway, prompted questions about my Hagen tapestry loom. This Norwegian loom is no longer made, but they sometimes come up for sale second-hand. 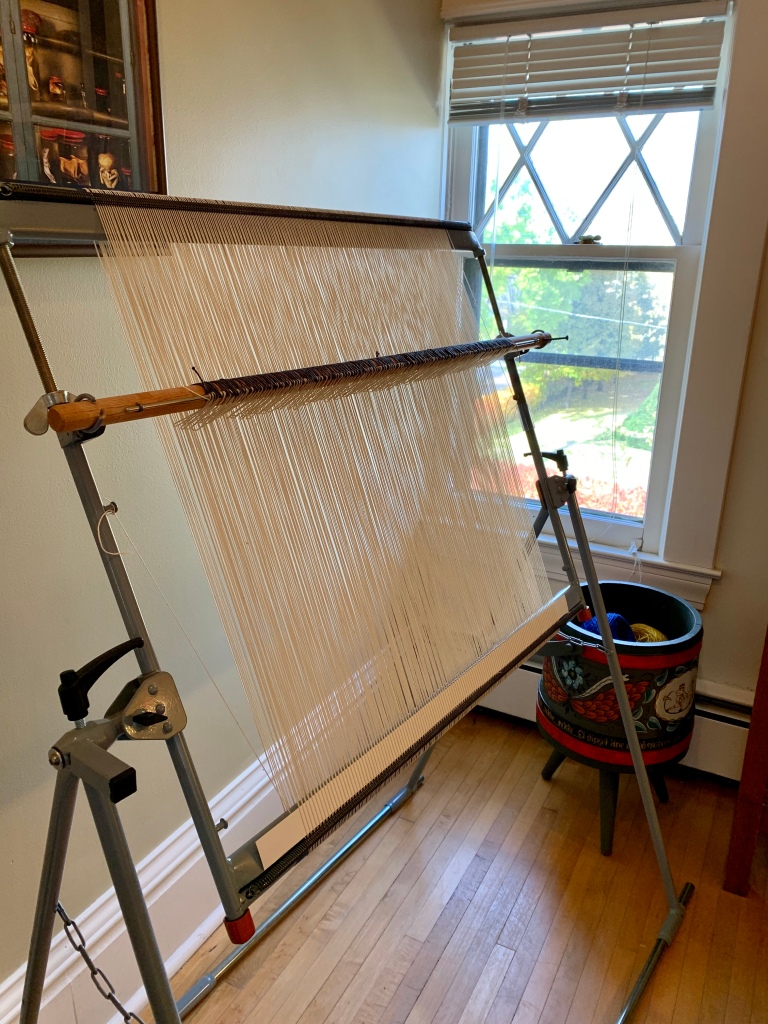 The Hagen loom is strong and pleasant to use.

I love my loom for a number of reasons. The frame is rigid metal and holds beautiful tension for tapestry.

It is minimalist, so that taken apart, it takes little space to store. At one point I made a large bag with handles to transport the frame part. I carried the folded up leg sections separately, making the whole set-up easy to transport for demonstration purposes. For me, the legs/stand are crucial, rather than using it as a table-top loom.  The legs allow you to adjust the height quite a bit. You can use the loom at a slight slant, or not.

The shedding mechanism allows you to pull up one set of warp threads, and then the other by moving a lever up and down. I’ve heard that the Hagen loom might be a prototype for the Mirrix loom; there are many similarities. Here’s a very short video showing how the lever moves up and down to change the shed. I use it when passing yarn over a distance of a couple of inches or more. When working in an area with short distances, I tend to leave one shed open, and just pick the other shed. It’s speedier.

The looms were popular in Norway.

I love the work of Tonje Høydahl Sørli, who often repurposes old Hagen looms as permanent frames for her works, like this wonderful piece, “Calm, Sober Reflection,” from 2013. She talks about finding them in an interview for the website Textile Curator.

Do you always leave the threads at the back of the tapestry hanging?

“Mostly. This is to make the viewer curious, and also point to the backside or inside. This thought is on two levels, one is the making of the tapestry, two is the theme – the double side to most things, and also the more problematic or tangled sides of life. The perfect front and the messy back!”

It started as an experiment, then I found out it was a good way to highlight the themes I am interested in and want to focus on. The frame is the tool, it is made for weaving, and was popular in Norway in the 1960s – 1980s. For many of those women weaving on a frame during the 1970s, when the fight for equal rights between women and men had its peak with the alternative movement, the weaving frame ended in the basement or attic. So for me its both a symbol of a fight for justice/equal rights that perhaps stopped to soon, and a way to show the work that lies behind the making of a tapestry.”

When I talk about Sørli’s work in my lecture on Norwegian billedvev, I joke that she missed the weaving school lesson about Norwegians generally weaving in the threads on the backs of their tapestries. See more of her imaginative work at http://www.tonjesorli.com.

Nostalgia enters in my love for this loom.

I attended weaving school at Valdres Husflidsskole in Fagernes, Norway, in 1977. I brought this loom home with me to Minnesota, which means it has been with me through graduate school, marriage (actually, both marriages), the birth of my children, and my entire career at the Minnesota Legislative Reference Library. It moved homes with me at least four times. During many busy years it remained in a closet, but I feel a deep connection. This photo shows me in weaving school at 21. I’m weaving on a different type of loom, but it is taken within months of my return to the U.S. with my Hagen loom.

I’ve resolved that no day will go by without at least one hour of weaving, until the tapestry is complete. So far, so good–in the last week since I began in earnest. I’ll post more soon about the cartoon and how the weaving is going. Today I wove the tail!