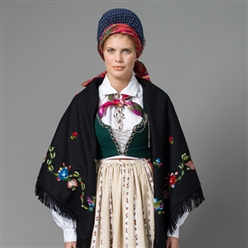 Our Textile Tour group visited the Kristiansand Museum and enjoyed a wonderful presentation and tour of old buildings with Tonje Tjøtte. She apologized immediately for her bunad (folk costume). “Today I have on my fake news costume.  Very, very fake.” She didn’t want to risk wearing her fine bunad while climbing in and out of the old buildings; instead, she showed us the individual pieces of her costume for the Vest Agder region.  (The photo to the right is from a page of Vest Agder costume photos from Norsk Husfliden.) The September before her daughter was confirmed, Tonje enrolled in a course and starting sewing a bunad for her.  She cut out two bodices and thought, why not make two?  She finished bunads for her daughter and herself by the following Syttende Mai, which required her husband to take on many household duties during the intense sewing stretch.

She made a green brocade vest. There can be fashion trends in bunads even today, Tonje explained. Lately, it has become popular for 14 or 15-year-old girls to choose a black bodice for their confirmation costumes, even though that color was traditionally only worn by older women.

Tonje had a beautiful cap.  It looked like a visor until she put it on to the top of her head.  It was sewn in a sort of patchwork of silks, over a stiff form of birchbark.  Over the band, a silk scarf is wound and tied in a sailor knot at the base of her neck.

It’s always interesting to hear stories about the making and wearing of Norwegian folk costumes–there are so many rules.  Many aren’t always followed, of course.  For example, Tonje said that women were not supposed to have their white shirt sleeves visible in church; you should wear a shawl.  And on the other hand, the white embroidered aprons were only supposed to be seen in church, and not worn outside the church.  She displayed a bride’s shirt, with intricate white embroidery that used to be reserved only for weddings.  “But now Norwegians have become wealthy, and nothing is good enough, big enough.”

We toured several old wooden buildings on the beautiful grounds. Many of the beds had coverlets on them, like this corner bed with a rutevev (square weave) coverlet on it.

There was a narrower skilbragd coverlet in a cradle.  Tour guide Ingeborg Monsen mentioned that it was clearly only half of an original piece; you could tell because one side was plain, and the other had fringes.  Sometimes, when weavings were handed down in a family, a weaving would be separated in half.

Knowing her textile-loving audience, Tonje picked up many of the coverlets and held them for us to see. 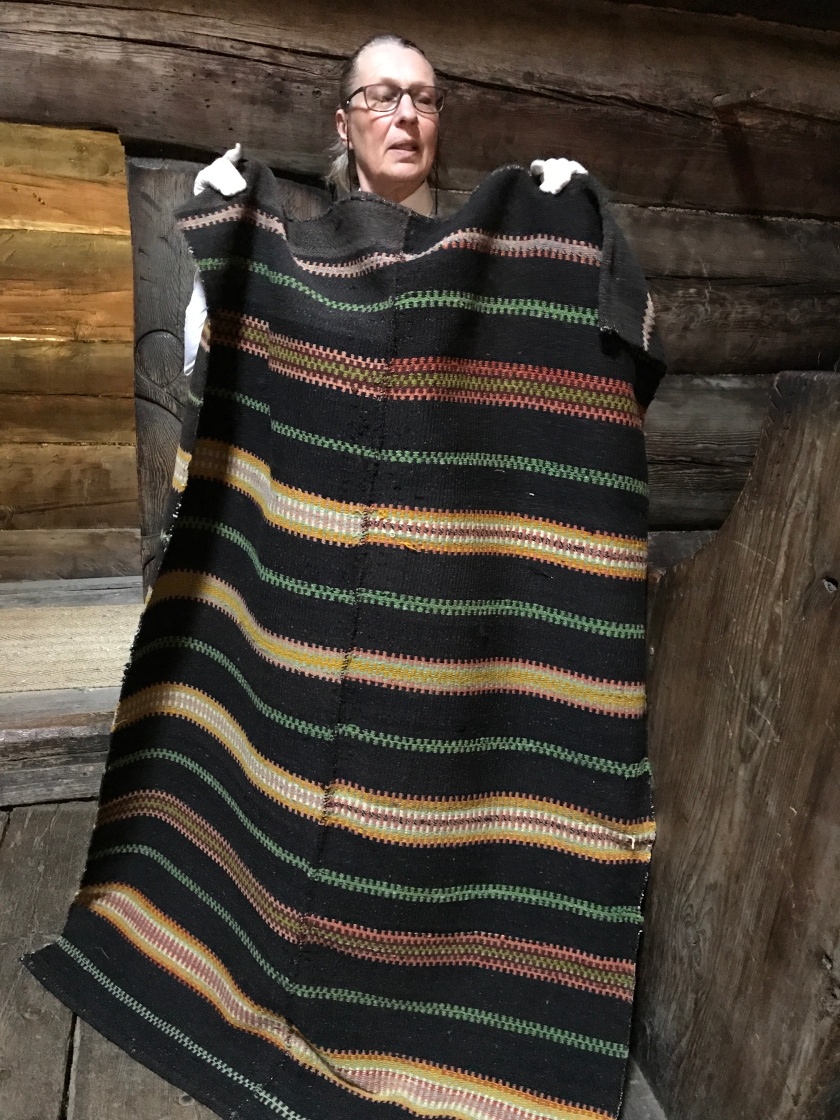 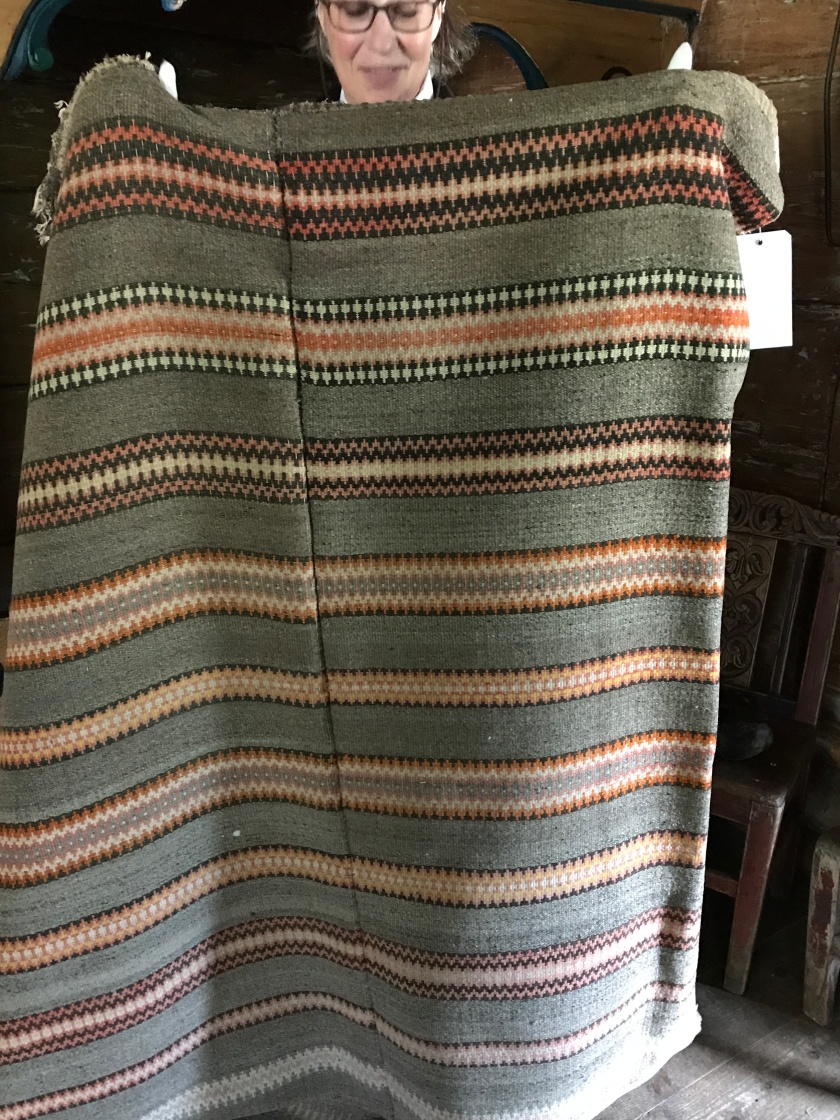 A disappointingly small number of weavings were displayed in the meeting room, and only one of the seven Danskbrogd coverlets that the museum owns, and that I was looking forward to studying.  This wasn’t my morning for good luck; they ran out of vaffler by the time I reached the front of the line in the cafe. 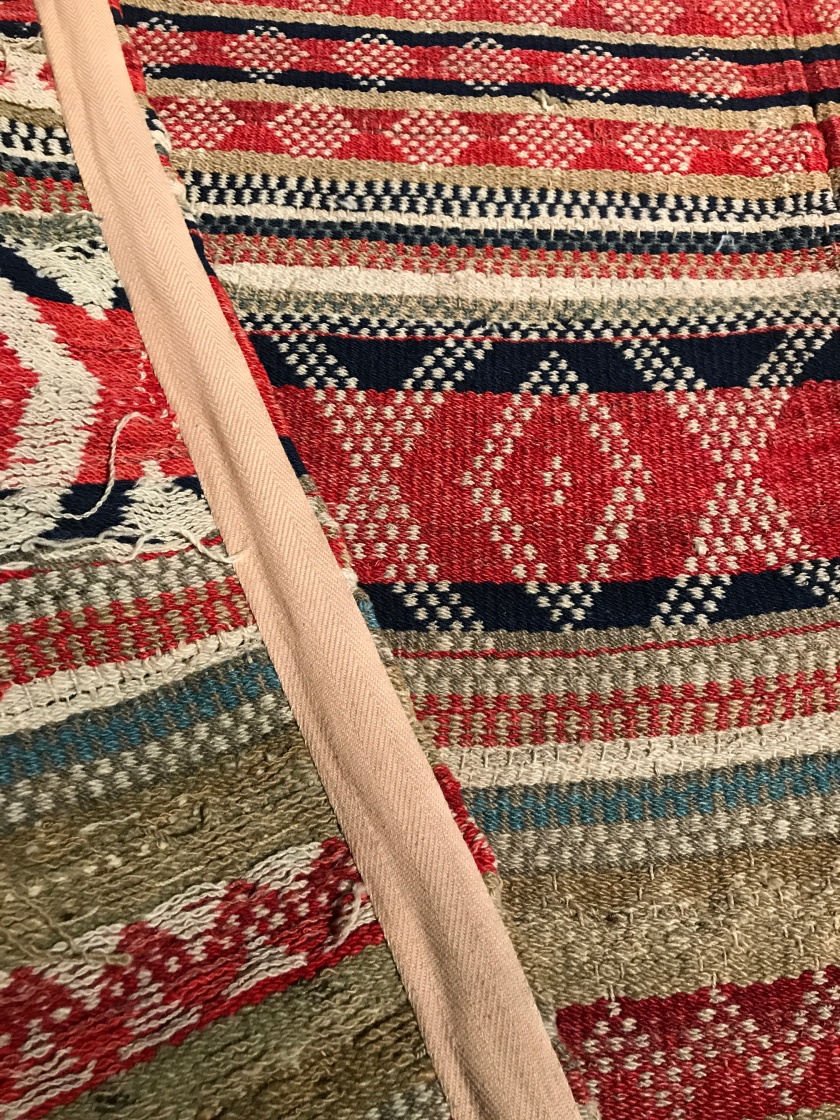 In this article from the Norwegian Textile Letter, “A Treasure of Danskbrogd Coverlets from the Vest Agder Museum,” there are photos of all the danskbrogd pieces in the museum’s collection.  I’ll just have to try to see them another year.

At least ten of the graves in the Valley Grove cemetery have the clasped hand image, so it will make its way into one of the tapestries I am weaving for the Valley Grove Preservation Society, with a grant from the Nordic Churches project. More at robbielafleur.com #tapestryweaving #tapestryweaversofinstagram #billedvev #valleygrovechurch #valleygrovetapestries #nordicchurches
I am giving a short lecture on Zoom tomorrow (June 8, 2021, 12 noon) for Vesterheim Norwegian-American Museum, Collections Connection: Billedvev (Tapestry Weaving). You can still sign up today, or up to 9 am tomorrow, if you’d like to join in the conversation online. Link in a post at robbielafleur.com. The lecture portion will be posted on the Vesterheim YouTube site in the future, too.
My friend Mary Skoy knit me some covers for my clanking golf clubs! The (boring) club covers that came with my set are so tedious to pull off. Look at the pretty result! Mary said she hoped they improve my game. Yesterday--no. #golfclubcover
A Connection to Frida Hansen in St. Louis?
Weaving Bewitchment: Gerhard Munthe’s Folk-Tale Tapestries. Article in the new issue of the Norwegian Textile Letter, norwegiantextileletter.com.
Help find this missing tapestry by Frida Hansen. “the Little Mermaid,” 1925. Read more at robbielafleur.com. #fridahansen #tapestryweaving #norwegianweaving #tapestry #tapestryweaversofinstagram #missingart #tapestry