At the March Weavers Guild of Minnesota monthly meeting I spoke about my wonderful experience on the 2017 Vesterheim Textile Tour to Denmark and Norway.  I shared the stage with Melba Granlund, who described the Swedish art weaves class that she and seven other weavers enjoyed in Sweden following the Textile Tour.

I decided not to present slides in the usual “we went here, here, and here” order, but to highlight several reasons that the Vesterheim Textiles tours are such rich experiences. One of those reasons is that throughout each tour, you don’t only encounter inspiring textiles during the scheduled museum visits, gallery visits, and lectures.  They are EVERYWHERE, and that only makes sense. We often stop at lunch or dinner venues that are in historical buildings, with traditional textiles on the walls. We sometimes visit the homes of weaving instructors. We stop at shops that feature fine handcraft. Once we were served lunch by a local weaving organization; well, of course they would have work on display! 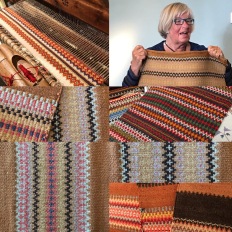 I like krokbragd.  I like the look, I like to weave them. Every single krokbragd you see can be instructional. Are the bands wide or narrow? Are the colors contrasting or analogous? Is the overall design symmetrical?  Do the bands end with a solid line or a zigzag, or is the piece filled with long pattern “legs”? What works well? What doesn’t? It’s like a language to learn, which may take my lifetime to explore.

During the Vesterheim tours I have taken, I snapped krokbragd photos. I’ll share some here.

Krokbragd hangings are ubiquitous in Norway. Compared to a tapestry, or a complicated skilbragd, or a time-consuming large rutevev coverlet, krokbragd coverlets can be considered a bit more “everyday” textiles. Katherine Larson, in her book, The Woven Coverlets of Norway, writes about krokbragd,

Although krokbragd coverlets are well known in most parts of Norway (except for the northern districts of Nordland, Troms, and Finnmark), the technique never commanded the respect given to coverlet weaves such as tapestry or square weave.  Perhaps this was because the krokbragd technique presented the weaver with less artistic latitude.  Yet a multitude of colorful patterns were possible on the smooth, tapestry-like surface of a krokbragd weaving, and the structure of floats on the reverse side make it extra thick and warm as a coverlet.  Relatively quick and easy to weave, krokbragd coverlets were a popular choice for everyday use in many Norwegian homes. (page 87) 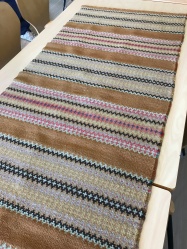 On the 2017 Textile Tour, krokbragd was not the focus of any of our activities, but I still found them.  Many are in this post, “In Norway You Don’t Look for Krokbragd Weavings; They Find You.”

At the Osterøy Museum, our focus was mainly on coverlets woven on the warp-weighted loom.  There were a few krokbragd coverlets, too, and a tiny one, woven as a breastplate for a costume.  See: “More Historical Krokbragd Inspiration.”

Here are some photos of krokbragds encountered on previous tours.  Perhaps there will be a band or a color combination that will appear on another weaver’s loom in the future?

In the same building a krokbragd was hung horizontally.

In 2015 I was not on the Textile Tour, but visited Norway with my husband.  With our friend Ingebjørg we visited Kersti Bondhus, who had several krokbragd coverlets in a refurbished barn that is now used to serve tourists. One was in a beautifully carved bed, along with a bear! I really like the way these krokbragd bands are assembled.

Krokbragd is a technique that can deliver wildly varying results based on sett, color, and pattern combinations.  Posting this makes me want to get back to my loom, to brush up on my krokbragd language–to “write” something new.

The first of the #valleygrovetapestries is on the loom and underway. Read about the start of this animal and oak tree homage, and about how tapestry requires so much sampling, at robbielafleur.com. #tapestryweaving #tapestry #tapestryweaversofinstagram
The new issue of the Norwegian Textile Letter is up, with articles about symbols in Norwegian coverlets; an exhibit at Vesterheim Norwegian-American Museum; art Weaving in Valdres; tapestries in post-war Norway; and a "rag" rug with a very unusual weft. Norwegiantextileletter.com #norwegiantextiles #scandinaviantextiles
This is my cameo appearance at the end of a six-minute video I made on the iconic Wise and Foolish Virgins tapestry image (with cool contemporary versions too. The video is linked on my blog, Robbielafleur.com. Watch it and this clip will make sense! #billedvev #tapestryweaving #wiseandfoolishvirgins
In the latest blog post I link to a 20-minute talk I recorded for Vesterheim Norwegian American Museum on Norwegian billedvev, focusing on the pieces owned by the museum. https://robbielafleur.com/2021/08/18/investigating-norwegian-billedvev-an-online-tapestry-talk/
Last day in Maine. Not enough lobster yet, so we had a fabulous lobster roll at Scarborough Fish and Lobster. Highly recommended!
Arthur wasn’t so happy about sitting in the car from Wisconsin to Maine, but meeting the ocean was pretty great!