I’m putting together an exhibit of Swedish and Norwegian tapestries from the extensive textile collection of my friend Carol Johnson.  “Tapestry Treasures from the Collection of Carol Johnson” will be up in at the Weavers Guild of Minnesota from January 12-April 12.  Carol purchased her treasures largely on eBay, with a few of the more valuable pieces from dealers and estate sales. I wrote about her tapestries last year in the Norwegian Textile Letter, “Dipping Into Carol Johnson’s Tapestry Collection.”

It’s a fun puzzle, both how to display them to advantage and to find out background on the mystery pieces–because almost all of them have no provenance.  We don’t know who wove them, and aside from the handful that include dates, we aren’t sure when they were woven.  Many were clearly woven by people taking up tapestry as a hobby, as the images are found in tapestry textbooks (See the blog post: Tapestry Houses and Aunts and Betrothed Couples).

Carol even has two tapestries of the same cartoon. I posted a photo and a query about them on the Swedish weaving Facebook site, Vävspolen. Kirsi Frimanson  responded, “This one is titled “Valborgsmässoeld.” In Sweden we light bonfires on the eve before 1st of May. This night is called Valborgsmässoafton.” Also known as Walpurgis night, it must have been a popular topic for tapestry; Inger Ridderstolpe identified another version on Tradera, an auction site. It will be interesting to have these two tapestries on display during my upcoming tapestry class at the Weavers Guild, because it is easy to see the different skill level of the two weavers.  The weaver of the bottom example was more skilled at weaving smooth gradations, while the shapes in the top piece are more jagged.

Some of the older tapestries have faded badly; it’s such a shame that the vividness of the pinks and browns have left the front of this tapestry. (On the other hand, I preferred the faded tones of another tapestry, whose original colors were acid-sharp.)

In most cases, careful attention was paid to finishing. Most of the tapestries are unlined.  Some are lined beautifully.  One had iron-on interfacing on the back, which I’m sure would make my textile conservator friend Beth McLaughlin shudder.

Several pieces are Swedish rölakan, a double-interlock technique, easily identified by the non-reversible nature, with ridges on the back.  I have woven many pieces using the Norwegian single-interlock rutevev technique, but not woven in rölakan–it just looks so difficult.

My social media crowd-sourcing continues to turn up information. Kirsi Frimanson suggested the Hemslöjden Skåne website.  The pattern for one of Carol Johnson’s pieces is still available.

While handling the tapestries, I like to feel their hand–whether they are stiff or droopy. I think it was Archie Brennan who said that first of all, with tapestry you are weaving a fabric. This is the piece whose hand I would most like to emulate in my own weaving–tightly and beautifully woven, with perfect edges. 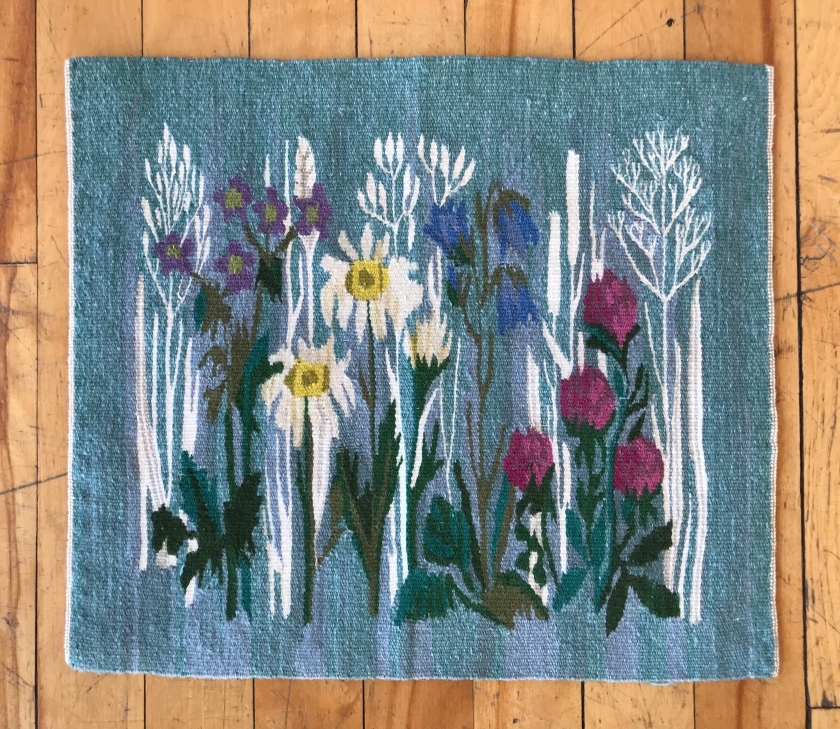 Expect more on the tapestries as I get them up, and continue to investigate them.  Be sure to stop in to see them, if you are nearby.  Just remember to call the Weavers Guild ahead of time (612-436-0463) to be sure there is not a class underway in the room in which they are displayed.