In my “Billedvev: Norwegian Tapestry Techniques” class we use Norwegian Tapestry Weaving by Maria Koppen as our textbook. (Purchase it easily via the Vesterheim Norwegian American Museum.) It’s a classic, originally published in 1974, and filled with clear illustrations of various joins typical of traditional Norwegian tapestry. Because I like to trace the history of Norwegian tapestry from its medieval origins to contemporary times, I was interested in an article Koppen wrote in Norsk Husflid, the Norwegian handcraft magazine, in 1975, “Tapestry: A Living Cultural Legacy.” (The translation is mine.) She wrote this two years before I studied weaving at Valdres Husflidsskole in 1977, during a decade when weaving, and fiber art in general, was popular.  The article stands up well today.

I feel inspired by her admonition to always improve your tapestry skills. 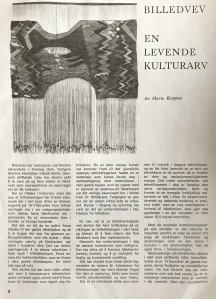 Good craftsmanship has always been a prerequisite for artistic expression and a means of freeing creative impulses and fantasy.The more skill you have with the craft, the more flexibility and freedom you will have in using it.

It takes time to acquire a craft. Anyone can fall to pieces over a child’s spontaneous artistic creation, with its wonderful forms and colors. It makes you question whether it is important to master anything. I think we should be clear that the freedom that children have, is the privilege of children. The freedom that we, as adults, can reach, isof a different sort. It isn’t something we always possess, but something that we must strive for over a long period. Along the way, as we use our abilities, our fantasy and creativity, we will experience golden moments with new insight, which leads us further and gives us freedom.

She also wrote about how old tapestries can be used as inspiration, but that new forms of expression are necessary today.

People’s forms of expressions shift in step with changing times and lifestyles, fashions, and  more. We admire the old tapestries, their exuberance and unmistakable charm.  They can tell us about the weavers who were at the looms, and they are rich documents left in our care. But the form of expression that they represent belong to another time. We must find our own expression and our own form. Only in that way can we talk about a living tradition.

I’m always inspired to find my own way and expression through tapestry. 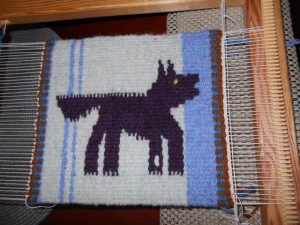 I sent the Koppen article to my former billedvev students, and received sad news in response.  Kata Bulinski, who attended my workshop in Decorah in September 2018, died suddenly just a few days ago.

I have been blessed to enjoy and learn from so many great students in my two years of workshops. Kata was one of those inspirational students. She was enthusiastic, patient, interested, and game for everything.  She came from Oregon to take the class with her friend Sonja Hoje, who had attended my class the year before and was ready to challenge herself again. Sonja and Kata knew each other since their grown children were small, and they enjoyed the class times and evenings together in beautiful Decorah.

Kata come with her loom warped with thin seine twine at 7 epi, which would make it difficult to get fine detail, but she understood and was quite happy to proceed.  She brought her own yarn, and her variety of small bits meant another challenge to design an image and not run out of one color or another. No problem! As she wove, she encountered angles and shapes that weren’t working out well. Again, no problem!  She took them out and re-wove until she was satisfied. Her positive attitude towards her task at hand was inspirational. Here’s what I wrote about her weaving after the class:

Kata Bulinski–who won this week’s distinction as the student who traveled the farthest, from eastern Oregon–had a dog in mind to weave. It’s fun to work with students to figure out the best way to weave their images.  We work with tracing paper over an original sketch, discussing which angles will be easy or difficult to weave, and make adjustments.  Kata was a great problem solver.  She ran out of her purple background; she chose another.  She wanted white paws on the dog, because that had significance in the Polish folk tale the dog represented, but they would fade into the light background.  So she made a white patch. Don’t the bold joins end up looking like the hair of the dog? 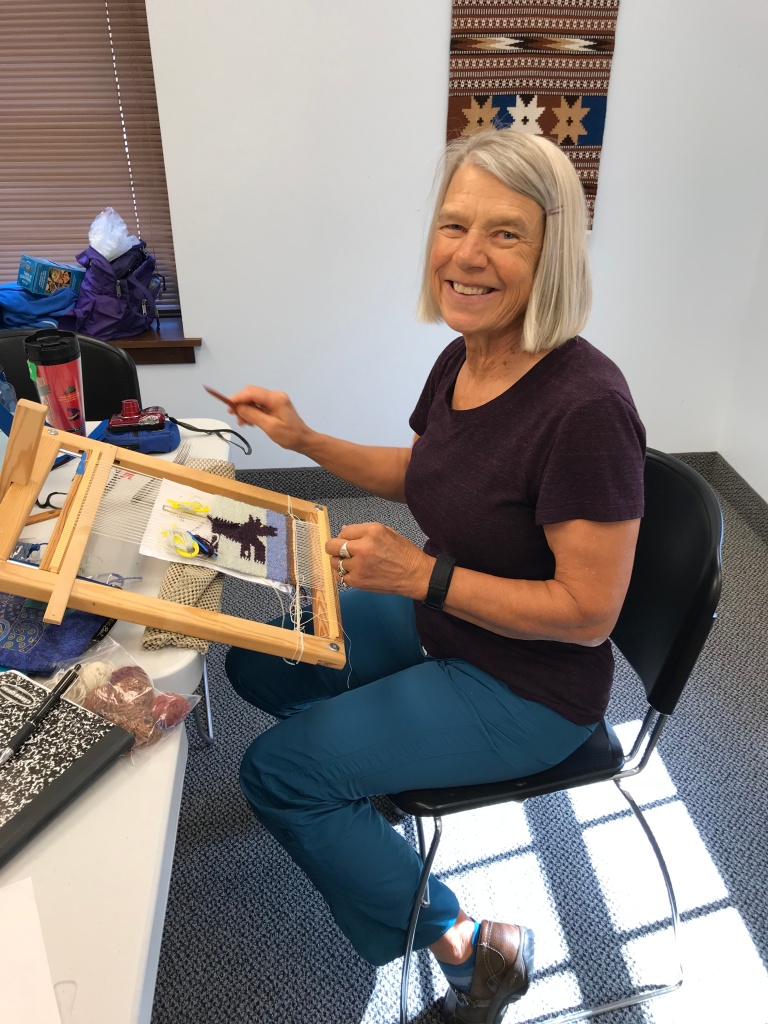 Kata was a loving friend to Sonja, and they even considered coming back to weave together next fall. I’m so sad to hear of Kata’s death, and my condolences go out to her family.

At least ten of the graves in the Valley Grove cemetery have the clasped hand image, so it will make its way into one of the tapestries I am weaving for the Valley Grove Preservation Society, with a grant from the Nordic Churches project. More at robbielafleur.com #tapestryweaving #tapestryweaversofinstagram #billedvev #valleygrovechurch #valleygrovetapestries #nordicchurches
I am giving a short lecture on Zoom tomorrow (June 8, 2021, 12 noon) for Vesterheim Norwegian-American Museum, Collections Connection: Billedvev (Tapestry Weaving). You can still sign up today, or up to 9 am tomorrow, if you’d like to join in the conversation online. Link in a post at robbielafleur.com. The lecture portion will be posted on the Vesterheim YouTube site in the future, too.
My friend Mary Skoy knit me some covers for my clanking golf clubs! The (boring) club covers that came with my set are so tedious to pull off. Look at the pretty result! Mary said she hoped they improve my game. Yesterday--no. #golfclubcover
A Connection to Frida Hansen in St. Louis?
Weaving Bewitchment: Gerhard Munthe’s Folk-Tale Tapestries. Article in the new issue of the Norwegian Textile Letter, norwegiantextileletter.com.
Help find this missing tapestry by Frida Hansen. “the Little Mermaid,” 1925. Read more at robbielafleur.com. #fridahansen #tapestryweaving #norwegianweaving #tapestry #tapestryweaversofinstagram #missingart #tapestry