I picked up Marta Kløve Juuhl and her friend Sigrid Skeiseide at the Minneapolis airport on July 10, and hosted them overnight before a Vesterheim volunteer drove them to Decorah. Marta came to teach two classes featuring the use of warp-weighted looms, the same type of loom used in Viking times.

One evening is not enough time to see the wonders of Minneapolis! I wanted to be sure they saw at least one landmark – the Cherry and the Spoon sculpture at the Walker Art Center.  It’s near our house.  Would they be too tired? No problem!  Norwegians are, on the whole, intrepid walkers; we saw all the art at the Sculpture Garden, despite the fact they just stepped off the plane from a transatlantic flight.

In Marta’s first class, the students each wove a grene, a traditional striped Sami coverlet woven in natural sheep colors.  Marta’s friend and former student, Sigrid Skeiseide from Haugesund, Norway, traveled all the way from Norway to Iowa to take Marta’s class in traditional Norwegian weaving.  Think about it.

Here is Sigrid and her grene, just off the loom. 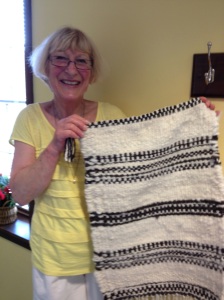 Sigrid is amazing.  She built her own warp-weighted loom and has set herself the goal of weaving a large wall piece with yarn she will spin and dye herself.  She enthusiastically told me about the beautiful yellow shades that are possible with heather.  For the class she brought yarn in beautiful natural shades that she spun herself.  Her yarn was more loosely twisted than the yarn used by the other students, which was commissioned by Marta from a Sami woman in the far north of Norway.  Seeing that delicious yarn and hearing about other amazing, dedicated students made me sad I wasn’t able to take that class as well.

Sigrid said her spinning was quite a learning experience.  To get a needed twist in the yarn, she started by twisting it with her hands, realized that would take weeks, and finished with a drop spindle.  When woven, the surface of the looser-twisted wool resulted in an engaging fluffy surface.  Sigrid also learned that a “grene” uses a lot of wool; she scaled her piece to use the amount she had, and still needed to add a bit of other yarn to finish the last band.  (In this close-up you can discern the less fluffy yarn in the white section near the bottom.)

Decorah has a new fan in Sigrid, who plans to return in the future.  “I could just go hiking for a week,” she said – enthusiastically, of course.

I attended Marta’s second class, also using warp-weighted looms, in which the students had the choice of weaving a hanging in the West Coast (of Norway) style, with many pattern bands, or a rya, a weaving with pile using a type of knot from Viking times.  We had ten students; half chose the banded technique, half the rya.

Even though many of my respected weaving friends have loved working on warp-weighted looms,  or as the Norwegians call it, an “oppstad vev,” I haven’t been that interested.  A warp-weighted loom is basically a beam held by two upright supports.  The warp threads hang down from the beam, tensioned with rocks tied to bundles of threads.  Why would I want to use that sort of loom when I have a large floor loom that takes advantage of technological advances made over many centuries?  And do I need another large loom in my house? I chose to take the class because I heard Marta Kløve Juuhl speak at a conference a few years ago and liked her enormously. And it was a good move; Marta’s enthusiasm and encouragement were boundless.