Christmas goes on forever in Norway, so I’ll choose this “romjul” day to wish a merry Christmas to readers of this blog.  The days of romjul fall from December 27 to New Years. I have much to be thankful for – a loving family, a sunny winter day, and an enormous number of interesting weaving projects to accomplish in the new year.  I could relate my feelings to the words of twenty-month-old granddaughter Alden at the Christmas dinner table.  She ate for a while as the adults enjoyed each others’ company and the roast.  Alden announced once, and then many more times, “Ah-da (all done).”  NO ONE moved to take her down from the high chair.  Finally she changed her tactic and yelled, “UP!”  So there you go.  2013 is all done, even if many projects I planned to finish are not.  I look forward to 2014.  Up!

On the Vesterheim Textile Tour this summer I was amazed and captivated by the chenille worms I saw at the home of Helga Bergland.  I don’t know what else to call them; they are fluffy pile edgings primarily used on embroidered mittens and gloves. Like this:

There are different ways to create the pile edgings.  One is to simply use a large tapestry needle to make loops sticking up on one side of a piece of fabric, and then trim the loops into a nice half-moon-shaped pile.  I tried that.  I put in colors without a preconceived plan and used different weights of wool yarn, and still the experiment turned out well.  What should I do with it?  I decided it would make a good top edge for a Christmas stocking for granddaughter Cora. 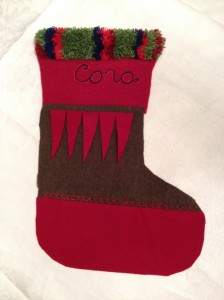 I am so sad that Cora was not in Minnesota this Christmas, especially since her father Joe reported that she walked eight steps (!) on Christmas Eve. She turns one on January 11.  The stocking is not done, but it will be when she is here, for sure, next Christmas.

Another way to make the edging is to weave lengths of fringe on a wooden pin using a playing-card-size paper heddle, and then put the lengths of fringe together to make designs.  The instructions can be found the in the beautiful book, Handplagg.

Early in December I visited my mother in Arizona, and decided that was a good time to try the technique.  Unfortunately the only nearby place to buy yarn was the Hobby Lobby, filled with really inadequate synthetic yarns.  For the best chenille worms, I think that good wool yarn is important.  Wool fills out, and can even be fulled with a little moisture.  Even though I used the awful yarn and my resulting worm did not reach the perfection of the pieces I saw last summer, it was still cool.  It became the heading for a Christmas stocking for my daughter Margaret. Near the bottom you can see a row of the single woven fringe. 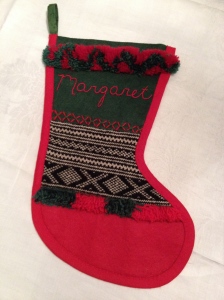 If I made a stocking for Margaret, I thought I should make one for her boyfriend Jeff.  For his, I reverted back to the poked-in-loops of yarn, which I trimmed afterwards. 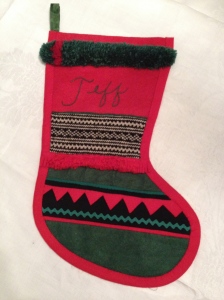 You can see that the worm-making experiment snowballed into the stocking-making project.  That seems to happen to me a lot.  I feel that an experiment should result in a useful or beautiful object, and end up spending many more hours than I initially guessed.  For the stockings, I just kept dipping into drawers and boxes, and added embellishment.  The backs are made from a pretty piece of Mexican fabric. 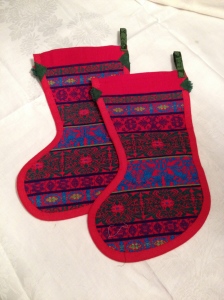